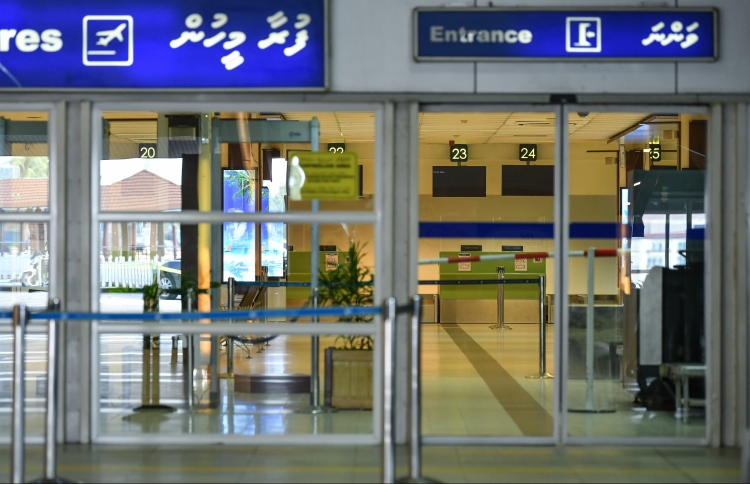 Velana International Airport on Wednesday implemented social distancing measures with clearly visible distance information and floor markings in passenger terminals, a precautionary step for the safety of passengers and staff, amidst the global COVID-19 pandemic.

According to Maldives Airports Company Limited (MACL), bright floor markings can now visibly be seen, three feet apart from each other, in places of possible passenger congestion.

In addition, four feet tall glass sheet separators between counters were installed to strengthen the protective measures against the virus.

MACL further revealed that hygienic measures would be intensified across the airport. All seats and desks, lounge areas, ticketing and check-in counters, along with flooring and airport tarmac area are subject to daily disinfecting drills.

In a bid to contain the spread of COVID-19 in the country, the Maldivian government on March 27, stopped issuing on-arrival-visas and closed its borders to incoming tourists.

While most of the airport operations were suspended in response to the government’s decision, MACL staff remain mobilized to oversee the operations of cargo flights along with chartered flights including repatriation flights. The airport company revealed that the airport fire department was undertaking the disinfecting work of these aircraft.

Following its first confirmed local transmission on April 15, Maldives’ capital Malé has recorded a significant increase in COVID-19 cases. The city is one of the most densely populated areas in the world.

Presently, Maldives records 618 confirmed, 596 active cases of COVID-19 and a total of 20 recoveries and two deaths. The country recorded its first virus death, of an 83-year-old local female, on April 29.

In addition to the capital, virus cases have been confirmed in Uligan in Haa Alif Atoll, Narudhoo and Milandhoo in Shaviyani Atoll, and Thulusdhoo in Kaafu Atoll.

The World Health Organization (WHO) has classified the spread of COVID-19 as a global pandemic. The new strain of novel coronavirus has infected over 3.83 million people and claimed over 265,300 lives around the world. However, out of those infected, 1.3 million people have recovered.