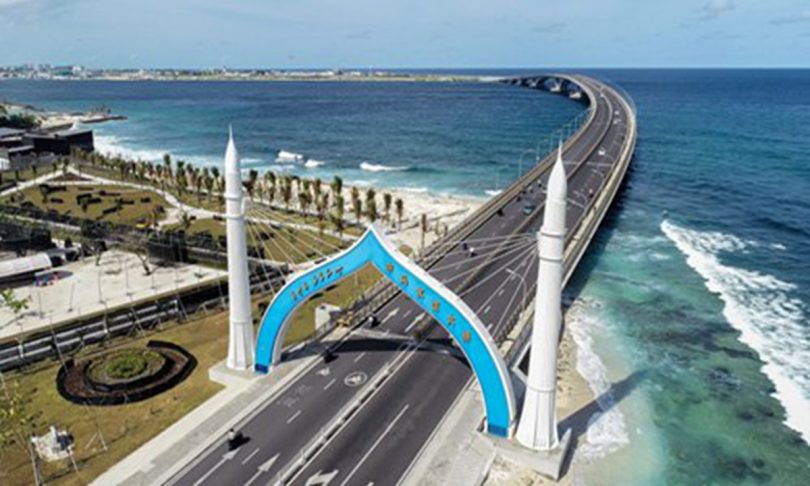 An aerial view of the China-Maldives Friendship Bridge linking the Maldivian capital of Male with neighbouring island Hulhule Photo: Xinhua

US foreign policy has for a long time been an opportunistic use of geopolitics.

This was proven once more after US Secretary of State Mike Pompeo announced on Wednesday that the US will open an embassy in the tiny nation of the Maldives, 54 years after the two established diplomatic ties.

On his Twitter account, Pompeo showered praise on the Maldives for its “great progress in supporting democratic institutions” during his visit to the island nation.

It seems the US didn’t realize the contribution the Maldives has made until after 54 years of diplomatic relations. The fact is that Washington has found the small country can be exploited to serve its geopolitical goals.

Lin Minwang, a professor at Fudan University’s Center for South Asian Studies in Shanghai, told the Global Times on Thursday that by opening an embassy in the Maldives, the US can influence the island, and seek breakthroughs in its Indo-Pacific Strategy to counter China’s growing influence in the region. If it were not for China’s investment in and cooperation with the Maldives, the US wouldn’t even bother looking at it, let alone opening an embassy there.

With more US presence, the waters are getting troubled. It is the US that often drags smaller countries into the game of choice, because it fits US interests. But for these countries, maintaining a balanced relationship, rather than picking sides, among major powers is in their best interest. However, their interests have never come across the mind of the US.

Washington does not just use this tactic in South Asia. Take Africa. For the US, Africa has for long not been the focus of US attention. But after China brought development momentum to the region, the US began to fasten its geopolitical arrangement in Africa and tried to drive a wedge between Africa and China. Washington’s selfishness is clear.

The US moves in the Maldives have the Indian backing in the wake of changing regional dynamics. In recent years, India, which has viewed the Maldives as its backyard, sees China’s footprint in South Asia and the Indian Ocean as a challenge to its dominance in the region. India wants to bring the US into the region to check China’s rise.

India used to be wary of US presence in its backyard. In 2013, it opposed Washington’s proposal to sign a Status of Forces Agreement with the Maldives to build military bases there, but in September this year when the US and the Maldives signed a defence framework agreement, it voiced support for it because the pact would bring the small island nation into the Indo-Pacific orbit.

The US and India now see China as their common foe, which serves as the basis for their closer partnership. However, instead of geopolitical calculation, China focuses on economic cooperation, which helps boost regional integration and development.

India’s indulgence in the US manoeuvre in the Indian Ocean means that India will eventually be pulled into a rivalry with the US in the region. As India views the Indian Ocean as its core interest, this will impede New Delhi and Washington from getting strategically intimate.