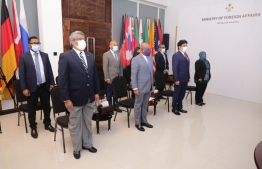 Tijjani Muhammad-Bande, the President of the United Nations General Assembly, on Tuesday hailed Maldives’ support for the UN to implement its Sustainable Development Goals (SDGs) and build resilient communities.

Muhammad-Bande made the statement during a virtual reception, hosted by Maldivian Ambassador to the UN Thilmeeza Hussain for UN Permanent Representatives, on the occasion of the 55th Independence Day of Maldives.

“The importance of international law for these countries cannot be overemphasized and the United Nations are the key role in supporting them to achieve their aspirations”, he stated.

He also reiterated his willingness to continue working with the Maldives to further strengthen and enhance the multilateral system, acknowledging the current challenges regarding the issues of climate change and the ongoing COVID-19 pandemic.

“I am confident that the long record of good cooperation between the Maldives and the United Nations will continue to bear fruiting days ahead and strengthen our common resolve to seek the best solutions to the system as a whole”, he said, concluding his remarks.

In addition to the UN General Assembly president and Permanent Representatives to the UN, the virtual reception was attended by Foreign Minister Abdulla Shahid, who assured that the island nation would engage more with the UN in the coming months.