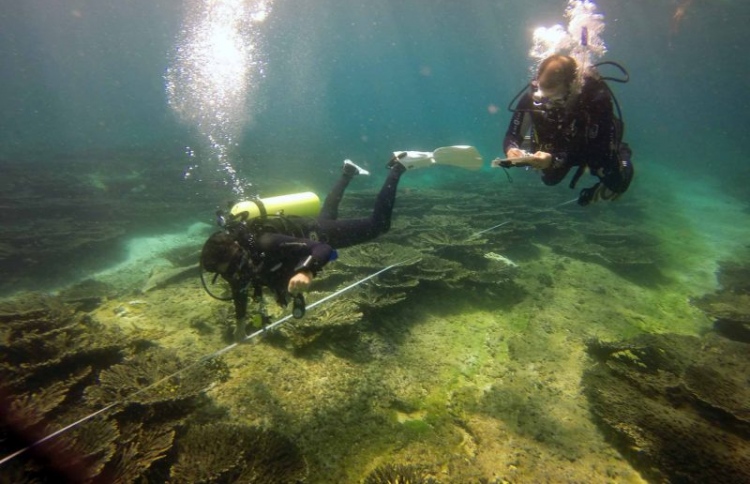 During the discussion, Dr Mizna emphasized the importance of promoting environmentally sustainable practices, noting that Maldivian culture, society and economy were directly linked to the health of its surrounding waters.

Also a PADI Dive Instructor and co-founder of Raalhu Edhuru Raajje Tour Surfing, Shaaziya stated that the theme for World Oceans Day, “Innovation for a Sustainable Ocean”, was relevant to Maldivians around the year.

“Whether we believe it or not, climate change is happening”, said Sendi, a strong advocate against the effects of climate change on fragile marine ecosystems.

He warned that the frequency of coral bleaching was increasing compared to previous patterns, which predicted major bleaching events to occur only once every ten years. On this note, Sendi revealed that 2015’s bleaching event occurred despite previous occurrences being recorded in 2010, 1998 and 1988.

He also expressed concern regarding human-induced damages to coral reefs, stating that processes such as dredging and land reclamation exacerbated climate impacts on reefs. The former Dean of the Faculty of Marine Studies at Villa College asserted the need to audit Environmental Impact Assessments in order to ensure their accuracy and limit the damages caused by major development projects.

Throughout the webinar, every member on the panel spoke up against the ongoing Gulhifalhu reclamation project, with Zoona noting that it would irreversibly harm Vilimale’s house reef, a site which her diving business benefits from and utilises in its educational initiatives.

Zoona, Maldives’ present PADI Dive Course Director, stated that it was the only location across the Greater Male’ region, at which school children could experience a natural coral reef, first hand.

Speaking further on efforts to preserve future generations’ access to coral reefs, Zoona expressed concern regarding the difficulty of studying marine biology in the Maldives and stated that providing such opportunities could increase public involvement in environmental issues and facilitate representative decision making.

In response to a question on desired long term goals and governance, Mizna urged Maldivian citizens to individually make contributions to conservation efforts as it would lead to a collective impact and influence future policy decisions.

Shaziya, a winner of a presidential award in 2019, described the incumbent government’s manifesto as ideal with regard to environmental conservation. However, she expressed eagerness to see its proper implementation.

On numerous occasions, many ocean advocates in the Maldives, have echoed the sentiments described by the Muraka Vahaka panellists, claiming that immersing oneself in the beauty of a live reef and a natural beach is not simply every Maldivians’ birthright but integral to the continuation of awareness and conservation efforts. This right is one which, according to these environmentalists’, resident’s of Male’ City should also enjoy easy access.