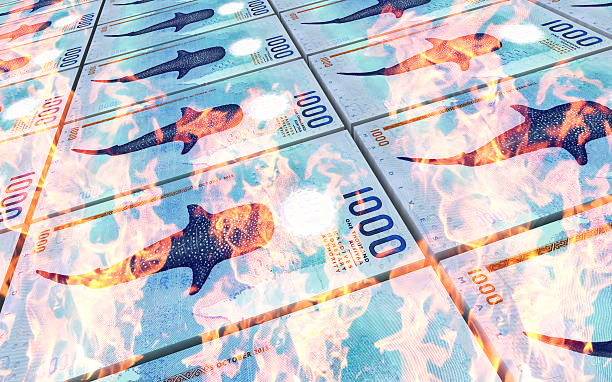 The devastating impacts of COVID-19 are undoubtedly still ringing across various economic sectors around the world. For the small island nation of Maldives though, the sector most affected is tourism. Often dubbed as the “life-line” of the Maldivian economy, tourism accounts for roughly a third of our national GDP. Figures show that under normal circumstances, we are blessed with approximately 4065 tourist arrivals per day (2018). Even after the country re-opened the borders with renewed optimism and vigour in July, the figures are a mere fraction of the previous years and continue to remain dismal.

The “sunny side of life” has yet to see a slight ray of hope or sunshine.

Not only is tourism a huge portion of our GDP, but it is also our main source of US Dollar inflow. It is safe to say that we have all started to feel some of the creeping effects of the fall in the value of the Maldivian Rufiyaa (MVR) against the US Dollar (USD) as tourism rates continue to stay stagnant. This article analyses 3 immediate impacts caused by the rise in the US Dollar value in the Maldives.

The shortage of USD has led to a significant increase in the size of the black market. As a result, USD is currently traded at a rate of 1 USD = 18 to 21 MVR in the black market. Meanwhile, banks and authorities continue to follow the fixed rate at 1 USD = 15.42 MVR.

One of the key issues prevalent in the Maldives that causes people to resort to the black market is that we have a fixed foreign exchange system. This means that the rate does not change according to the market forces of demand and supply. The invisible hand is restrained at this fixed point, the natural free flow of economic forces is halted, and the system is unable to fix itself. This hindrance lends itself to more problems, some of which are highlighted below.

As a country that lacks many basic natural resources, we are heavily reliant on countries such as India, China, Singapore and the UAE for the imports of some of our most basic needs. Staples such as rice and flour are imported from such countries, as well as most of our meat.

As the dollar shortage hits local importers, they will be left with no choice but to procure USD at the elevated rates. As a result, the cost of sales will increase. The effects of this are twofold:

Usually, a fall in the exchange rate makes goods and services in that country cheaper to foreigners, which will lead to tourists flocking into the country to take advantage of this newfound affordability. Tourism is a highly price elastic service (PED), so even a slight decrease in price will be reflected by a more than proportionate increase in demand. However, the Maldives will unfortunately not experience this benefit for two principal reasons:

So, who are the people still travelling and visiting the Maldives? I speculate that these people consist of the fearless — those who are either naive or healthy — and the people who have already caught the Coronavirus and are confidently immune. At the moment this particular group of travellers remain a minority and their numbers alone are not enough to rectify the economic consequences of the general decline in tourism.

2. Secondly, as mentioned before, the MVR is fixed, not floating. If our exchange was floating, similar to most countries, the reduction in the value of the MVR is likely to be translated into a more than proportionate increase in the number of tourists visiting due to the subsequent fall in price (PED). However, because the foreign exchange in the Maldives is fixed, foreigners are unable to gain this benefit. Tourists will usually use debit or credit cards to make purchases and use services, so they will be paying the bank rate of 1 USD = 15.42 MVR despite the real rise in the value of USD.

Therefore, because of this fixed system, the drawbacks of the shortage are deeply felt while any potential benefits remain unrealized. Admittedly, there will be several other effects felt in the economy that might not be mentioned in this paper. Nevertheless, what I am urging to be considered is whether our current foreign exchange system is truly the best.

Ardent capitalists will argue that the floating exchange system will mitigate the economic impediments we currently suffer. The invisible hand will then have the freedom and power to move, without being restricted or hindered by the government’s interventionist policies, ensuring that the market forces equilibrate.

This poses the question of whether we should float our currency or let our economy sink?

I believe that although the floating system has many virtues, given the nature and history of the Maldivian economy such an abrupt transition from the current fixed system to a fully capitalist floating regime may have unforeseen consequences. Proper due diligence must be done before such a drastic change.

In the meantime, smaller steps can be taken to alleviate the worst economic effects. One suggestion could be for the government to change the official rate to reflect the real value of the MVR. Rather than practising wilful blindness and stubbornly ignoring the ailments exhibited by our suffering economy, the government can react and take active steps well within their power to mitigate such issues, especially in times of crisis. This way, although the system may not be floating, the economy can be saved from the abysmal fate of sinking.