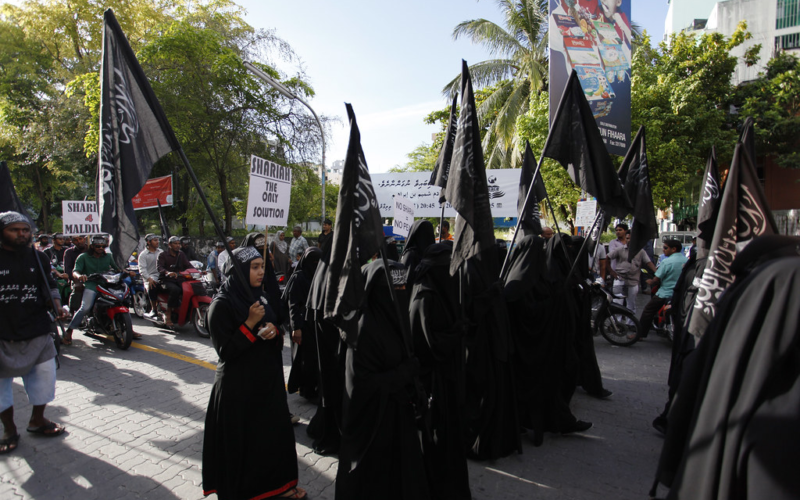 The Maldives, a small republic of 1,200 islands in the Indian Ocean, is traditionally a peaceful place, with most locals taking their security and stability for granted. However, today the Maldives has the highest per capita number globally of foreign fighters who have travelled to take up arms and fight in Syria. The government must reassert efforts to tackle the root causes of radicalisation, as well as address the exacerbating factors in play on the islands.

The Origins of This Phenomenon

Following the 2004 Sri Lankan tsunami, various Saudi Salafist non-governmental organisations came to the islands on the pretext of helping rebuild badly affected areas. Instead, members of these organisations gradually brainwashed young Maldivian men who were living below the poverty line into believing that the tsunami was a punishment for failing to follow the true teachings of Islam. Over the next 15 years, radical Islamist ideology infiltrated the social fabric of the islands.

Salafist ideologies have not just infiltrated the young islanders, but also the islands’ security forces, who play a part in the recruitment of young men to ISIS. An indirect consequence of this infiltration has been that sheikhs are licensed by the Ministry of Islamic Affairs to preach on the archipelago, free of any government oversight of their activity. This allows extremist views to be freely expressed and communicated throughout the Maldives. Without any checks in place, radical Sheikhs will continue to preach their views and facilitate radicalisation. The government must work towards a more thorough vetting process for the Imams and Sheikhs who practice on the islands.

Maldivian men make attractive recruits because of their physical strength and their experience in street gangs as a result of growing up on the islands. Perhaps more importantly, however, Maldivian men are attractive recruits as a result of their existing familiarity with strict Islamic teachings. As an Islamic Republic, the Maldives’ government demands that every citizen belong to the state Islamic religion and adhere to Sharia Law.

Maldivian men are also socio-economically vulnerable. High unemployment and levels of drug use make them susceptible recruits. Individuals who are part of criminal gangs or are serving time in prison as a result of this unemployment and drug use are at an elevated risk of radicalisation. The financial incentive and sense of purpose provided by terrorist groups purport as as an effective antidote to the difficult lives these young men lead.

How Severe is the Radicalisation Issue?

According to official law enforcement figures, 173 travelled to Syria to fight and 432 have attempted to (although the real number is estimated to be far higher). According to Maldivian law enforcement, as of December 2019, there are approximately 1,400 “religious extremists” located on the archipelago. 1 in 2,000 Maldivians fought for ISIS in Syria.

The wave of radicalisation that has swept the island is posing an increasing threat to the Maldives’ tourism industry. The government became aware of this threat in the early 2010s, and responded by passing two key pieces of legislation in 2014: the Prevention of Money Laundering and Terrorism Financing Act and the Prevention of Terrorism Act. This second Act led to the creation of the National Counterterrorism Centre in 2016, which has undergone multiple revisions in an attempt to strengthen the country’s anti-terror laws.

In October 2019, President Solih announced a five year counterterrorism plan.  Early work on the National Terrorism Response Plan began in cooperation with the UK government in December 2020, signalling a promising start to the initiative. This plan laid out how the country’s security apparatus will coordinate and cooperate in response to a terrorist incident. This Plan and the action already taken by the government are encouraging signs that the highest levels of the Maldivian state are alert to the risk and treating it as a policy priority.

A Problem Getting Noticed Further Afield

This issue has become so acute that many international bodies, such as the European External Action Service and the United Nations Development Programme have become involved. The EU provided EUR2,500,000 to the country to combat terrorism in 2019. EUR1,000,000 of this funding has gone towards a project that supports the Maldives government in developing a greater understanding of extremism and radicalisation. The funding will also be used to build community resilience to these forces that have so far created a conducive environment to Islamist extremism on the islands.

The other segment of the funds has gone towards strengthening the country’s institutional capacity to counter and respond to terrorism. The country will be offered support by INTERPOL and the United Nations Office on Drugs and Crime. This project will continue until June 2021 and will provide targeted support for the islands’ prison services in preventing radicalisation in prisons and better train the judiciary to prosecute terrorism and extremism related offences. Another ally in the country’s fight against jihadist terrorism is Japan, who in 2019 granted the government USD4,600,000 to help counter violent extremism and terrorism.

In December 2019, the Police Commissioner warned:

“There are close to 1,400 Maldivians with us today across the country who have fallen into extremist ideology to the point where they would not hesitate to take the life of the person next to them.”

These developments in the Maldives have in part been driven by ISIS’s broader strategic shift towards the Asian continent following their defeat in Syria and Iraq by 2019.

In February 2020, three foreigners were stabbed on one of the islands. Soon after the event, a Maldivian radical group affiliated with ISIS took responsibility for the attack via a video message. In this video, three masked men announced:

“The portrayal that this [Maldives] is paradise […] has become a mirage. From now on, the only thing they [foreign travelers] will taste [in the Maldives] is fire”.

They further warned that more attacks could be expected.

Indeed, only two months later, ISIS claimed responsibility for an arson attack on one of the islands. In what was their first attack on the islands, no one was killed but five boats were destroyed. In November 2020, police carried out a nationwide operation, arresting five suspected terrorists and foiling a planned attack.

The risk posed by this increased terror threat has significant implications for one of the country’s biggest industries – tourism – which accounts for a significant  25% of the country’s economic output. However, some anticipate it is tourism that is actually a key motivator for Islamic radicalisation.

The contrast on the island between the liberal culture of tourists, who are often scantily clad and consume alcohol, with the local population, who usually adhere to conservative Islam, makes for a tense coexistence. This has sparked a desire in the local population to stamp out the influence of Western culture. Terrorism is perceived as an effective way of deterring Westerners from visiting the island and thereby reducing cultural tensions.

If considerable action is not taken to address the conditions contributing to the radicalisation of  Maldivian citizens, there is real potential for terrorist violence to worsen as tourists return to the island after the pandemic. The dangerous cocktail of political instability, including an economy devastated by COVID-19’s impact on tourism, climate change, high levels of unemployment, and gang violence, has the potential to cause increased terrorist violence in the future.

The government must now confront this overlooked extremist threat in spite of the potential challenges posed by the status of Islam and Sharia Law in the country and in government. Political resistance is inevitable, but in order to make progress, the government must begin to root out engrained religious forces which are providing the systemic backdrop to the growing terrorism threat in The Maldives.