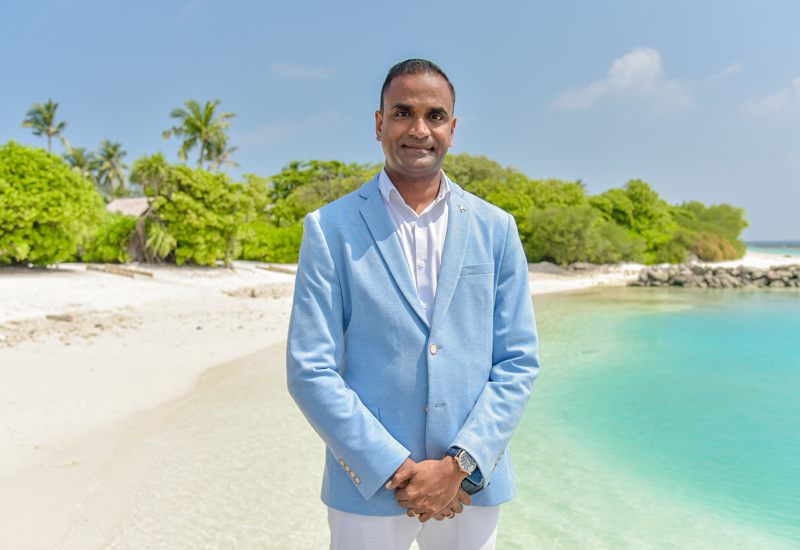 Hailing from what he describes as a traditional Indian family, Srikanth Devarapalli recalls that hospitality wasn’t the first choice when it came to choosing a career path: “Most parents want their children to become engineers or doctors, but I always knew I wanted to do something different. I remember going to a restaurant and being fascinated with the design and the service, the uniforms, everything. So I decided to pursue a career in hospitality.”

After college, Devarapalli went to work for Oberoi Hotels with a placement at Oberoi Amarvilasin Agra, just 200 meters away from the Taj Mahal. Two years later he moved to the Maldives after seeing a striking image of a resort. He explains: “I didn’t even know the name of the resort so I did my research and applied for a job. A lot of my old colleagues were already working in the Maldives so it became my second home.”

After close to five years, having worked for several brands including Four Seasons and Taj Hotels, Devarapalli went back to city life and, after a few years with Hyatt Hotels, a move back to the Maldives was on the cards: “I had the opportunity to work with Constance Hotels & Resorts in the Maldives where I was introduced to the all-inclusive style of resort, at a very premium level. It was considered one of the best in the Maldives in terms of the offering.“

After some time in Seychelles with the same group, Devarapalli returned to the Maldives to join the pre-opening team at Emerald Maldives Resort & Spa as general manager. On what drew him to the role, he said: “From the offering to the design and the fact that we are a member of the Leading Hotels of the World, I knew the standards we were going to set.”

Still, before signing, Devarapalli flew to the Maldives for a day. “For me, it’s very important every time you step on an island, to feel the vibe of the place. I’ve been to 100 Islands in the Maldives and on each island you have a different energy. So I came and slept on the island for a night. The resort was still under construction at the time but even then I was sure that this resort was going to be one of the best in the Maldives.

“We wanted to change the perception of all-inclusive properties in the Maldives. Traditionally, when you think of an all-inclusive resort, you have the boring buffets or a limited wine list. We have a choice of four restaurants for our guests including three à la carte restaurants with no restrictions. If a guest is staying for a week and they want to dine in that restaurant every night, they’re most welcome to. We don’t impose any restrictions and we’re also very proud of our wine list. We have 100 wines that are part of the all-inclusive package and we have dedicated sommeliers for each restaurant.” The only extras the guests need to pay for are the spa and scuba diving. Devarapalli explains: “Out of 50 guests checking out, maybe 45 guests don’t have any extras. We don’t even ask them to sign bills so they can have dinner or lunch and just go back to the villa.”

Devarapalli is adamant that the property’s staff sets it apart from its competitors: “Being part of the pre-opening requires a lot of sacrifice and dedication and with that in mind, we were the first resort in the Maldives to guarantee a minimum service charge for staff.” It’s an investment which has paid off. Devarapalli said that reviews from 90 per cent of the guests talk about the team.

Talking about what he has planned for the resort he said: “Sustainability is one of my passions. I want to start a coral propagation project and we also have a small garden where we primarily grow herbs and spinach. We want to do it on a larger scale and create an organic chefs’ garden where they grow the vegetables and carry out tours for the guests. We’re also doing sessions twice a week to educate the guest about the ecosystem in the Maldives.

“We also want to do hydroponics and rainwater harvesting. The design of our resort is unique because most resorts usually have thatched roofs so they can’t collect water. In our case, all the ceilings are actually concrete so that’s an opportunity for us and we’re already using solar panels for the hot water.”

Talking about the Maldivian hospitality market, he was positive and explained that improvements in infrastructure would do a lot to drive more tourists to the island nation: “One of the primary challenges has been the size of the airport but the second runway is close to completion. And there is a new terminal being built for seaplanes which means they can handle a higher volume.”