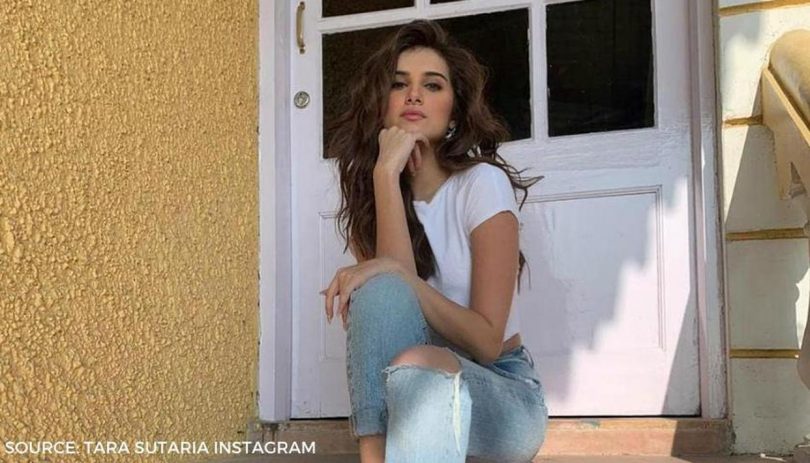 Tara Sutaria recently took to Instagram to share a picture of her from the Maldives. In the picture, the actor is seen posing lying down in the sand. She is spotted donning a brown polka-dot bikini. Her look is kept balanced with minimal makeup and open hair look. Tara Sutaria accessorised her look with a choker neckpiece. Not to miss he blue background of water that just made her picture frame even more eye-pleasing.

In the recent past, Tara Sutaria took to Instagram to share a picture of her ‘playing dress-up’. The actor was spotted donning a white button-down shirt. She paired it with black denim and accessorised her look with a gold chained necklace. Tara Sutaria glammed up her look with a pop of colour on her eyes and nude lips. The actor completed her outfit with open hair look. Tara captioned the picture as, “Playing dress-up with @avigowariker @mallika_bhat @manekaharisinghani’. Her picture received heaps of comments from fans.

Tara has also been actively preparing cakes at home amid the pandemic. She, time and again, keep on sharing glimpses of her indoor whereabouts on social media. Earlier, she also dug out a bunch of childhood pictures with Pia and shared them on Instagram.

On the work front

Masakali 2.0 has been sung by Tulsi Kumar and Sachet Tandon, with Tanishk Bagchi providing some additional lyrics. The recreation of the song has added female vocals that were not there in the original. She will next be seen in Milan Luthria’s Tadap alongside Suniel Shetty’s son Ahan Shetty. The film is in its pre-production stage and will resume shooting soon.