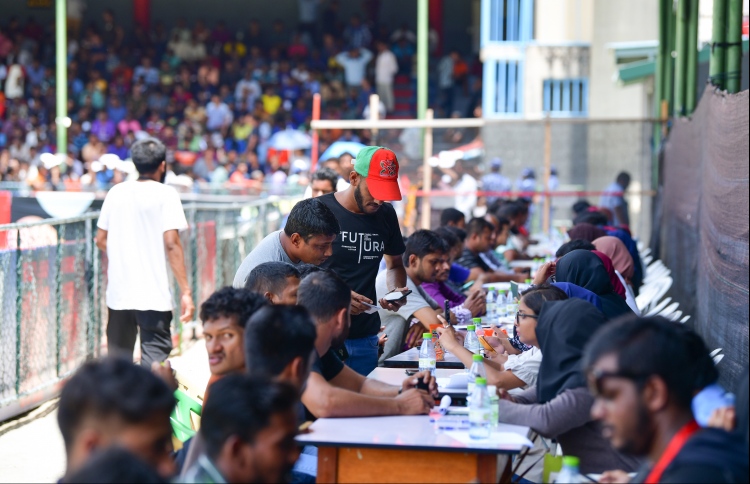 Minister of Economic Development Fayyaz Ismail revealed that the state identified 200 congested residences being shared by expatriate workers and that the inhabitants of 14 such residences were listed for immediate relocation.

According to the minister, rooms in some of the aforementioned living spaces were shared by 50, 30 or 25 individuals. He further disclosed that a number of these rooms measured 12 by 13 feet or were smaller in size.

“In some of the places, groups had to allocate separate time periods for sleeping”.

Minister Fayyaz stated that efforts were ongoing to relocate 5,000 expatriate workers to more adequate conditions within the upcoming week.

Currently, the state plans to temporarily move the individuals to housing units in Hulhumale Phase Two and residences in Gulhifalhu, Kaafu Atoll. However, the economic minister revealed future plans to establish a ‘workers village’ on Gulhifalhu.

Despite the relocation, the government will only secure accommodation while companies employing the workers will cover other expenses.

The expatriate population in Maldives numbers at over 144,600 out of which authorities earlier estimated that 63,000 were undocumented. Officials have expressed concern that a COVID-19 outbreak would put expatriates at greater risk of contracting and spreading the infection, as several foreign workers live in small, congested spaces, particularly in the capital city of Male’.

The World Health Organization has classified the spread of COVID-19 as a global pandemic. The novel coronavirus has infected over 1,286,600 people and claimed over 70,400 lives around the world. However, out of those infected, more than 271,800 people have recovered.