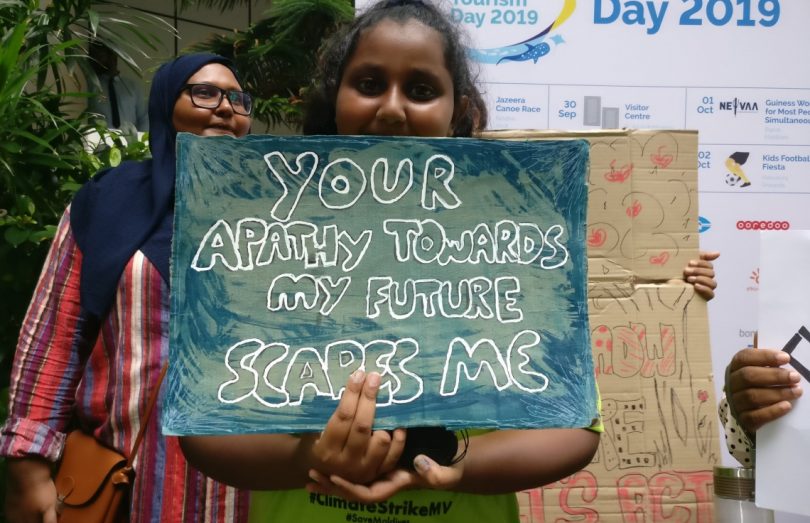 Citizen-led environmental campaign ‘Save Maldives’ published an open letter to Maldives’ parliament on Tuesday, calling on representatives to immediately “stop all environmentally destructive projects like Gulhifalhu and hold the government accountable”.

Calling into account the 19th Parliament’s formation of an Environment and Climate Change Committee and passing of a resolution to declare a climate emergency on February 12, Save Maldives criticised the Parliament’s passive approach.

“We have not seen any action in connection with this declaration”, reads Save Maldives’ document.

Speaking to The Edition, Save Maldives reiterated its collective stance, stressing that, “Neither the policymakers nor the lawmakers are walking the talk on the climate crisis”.

Stating that the pandemic “is an unprecedented crisis”, the open letter relates that effects are felt in “the country’s fragile healthcare system, weak social protection system and precarious economic system”.

According to the text, despite possessing knowledge of projects that may cause irreversible damage to a fragile environment, whilst the country faces negative impacts of global change, as well as the ability to assess economic impacts brought on by the pandemic, “Majlis is doing nothing to stop the major debt-funded projects continuing across the country at great speed”.

For the attention of the Speaker of the People’s Majlis,
Mr Mohamed Nasheed@MohamedNasheed @mvpeoplesmajlis https://t.co/c1mMBDLYiu

It then goes on to highlight the Kaafu Atoll Gulhifalhu reclamation project which was reportedly funded by a loan of MVR 300 million.   Many advocates have supported Save Maldives’ view that the project would cause “damage to certain diving sites”, which in turn would be detrimental to small tourism-inclined businesses.

The letter also refers to the parliament’s extraordinary emergency meeting, during which concerns regarding extreme weather conditions being experienced across the archipelago were highlighted.

It further cites 2016’s State of the Environment Report, which places the country’s dependence on natural resources and biodiversity for local exports and employment, at 98 percent and 71 percent, respectively.

Save Maldives said to The Edition, “Right now, we are experiencing a significant coral bleaching event. Over-heated oceans have created Hurricane Ampan in the Indian Ocean, the effects have been felt in the Maldives with damage to property and livelihoods”.

“The continuation of environmentally damaging projects – even during lock-down – shows complete disregard not only to the environment but to the current public health crisis and the consequent social and economic crises”.

Members of parliament’s Environment Committee meeting with 11 volunteers from the strike. PHOTO: SAVE MALDIVES

“The situation can only be interpreted as reckless disregard to national and public interest”, declared the collective.

Earlier in February, Save Maldives criticized President Ibrahim Mohamed Solih’s administration for continuing to disregard sustainable development in a time of national and global crisis. At the time, the Ministry of Planning and Infrastructure had overturned the Environmental Protection Agency (EPA)’s rejection of the proposed development of Maafaru International Airport.

Then on May 6, the government revealed its decision to move ahead with the reclamation of 30 hectares of land in Gulhifalhu for the development of facilities for the purpose of providing accommodation for 40,000 expatriates.