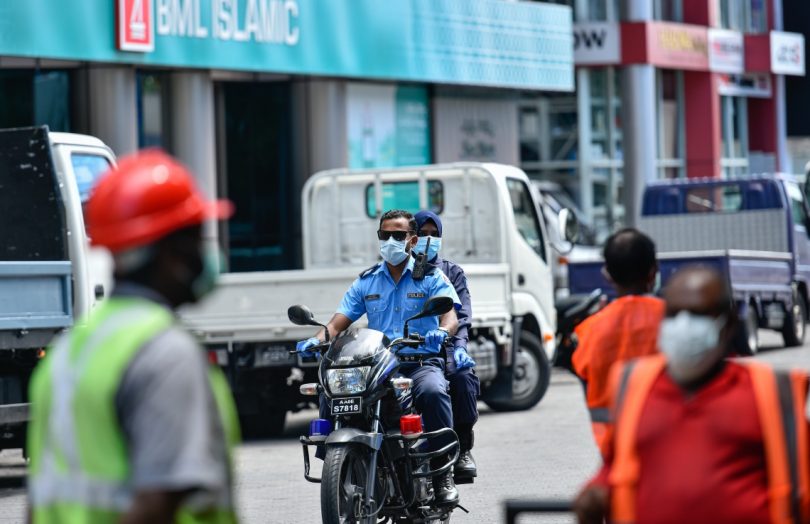 MALE, May 15 (Xinhua) — Thirty-eight new cases of COVID-19 were confirmed in the Maldives on Friday, raising the total case count above 1,000, while officials say that the peak of virus infections will arrive in two weeks.

Twenty-nine Maldivians, eight Bangladeshis, and a Nepali citizen tested positive for COVID-19 on Friday according to the Health Protection Authority (HPA), raising the country’s total case count to 1,020. So far, four people have died and 45 have recovered from the virus in the country.

Officials have projected the final case count of the country to rise over 77,000, and infections to reach their peak on May 31 with over 1,500 new cases on the day. Officials have been frank about the precarious situation of the country, saying that capacity for testing, especially in regional islands, need to be rapidly developed.

The first COVID-19 cases in the Maldives were reported from two foreign workers at the Kuredu Resort and Spa on March 7. The situation took a turn for the worse on April 15, when clusters of community transmission were discovered in the congested capital of Male.

According to data from the Ministry of Health, over 668 out of 1,020 confirmed infections are of foreign citizens, mostly Bangladeshis, followed by Indians and Nepalis. Experts said that cramped housing conditions have made migrant workers particularly vulnerable to the virus.

Members of the Maldives National Defence Force (MNDF), who have been on the frontline against the pandemic, have also been vulnerable with 40 officers testing positive, according to Major General Abdulla Shamaal.

A lockdown first imposed on the city of Male on April 15 has expanded to include the Greater Male Region and is now set to continue until at least May 28.

During the pandemic, the Maldivian parliament conducted a parliamentary sitting online via a video conferencing platform on March 30.

Local council elections which were originally scheduled for April 4 were postponed to April 14 and later to January 2021 by a bill passed in Parliament and ratified by President Ibrahim Solih on May 11, due to health risks posed by the pandemic.

On the economic front, Maldives stands to be one of the countries worst affected by the pandemic in the South Asia region, with the International Monetary Fund (IMF) projecting that the country’s GDP may contract by 8.1 per cent in 2020 largely due to disruptions to tourism.

The IMF Executive Board on April 22 approved a 28.9 million U.S. dollar disbursement to the Maldives under the Rapid Credit Facility in order to help the country cover balance of payments issues and fiscal pressures stemming from the pandemic.