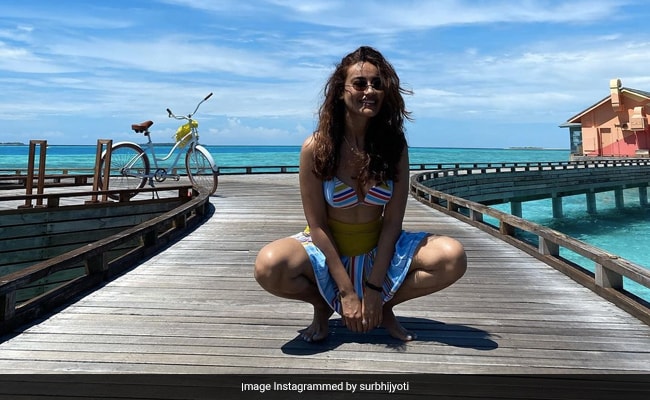 Television actress Surbhi Jyoti, who is known for playing the role of Zoya Farooqui in the show Qubool Hai, has been setting the Internet ablaze since Tuesday with stunning pictures of herself from her Maldives vacation. Surbhi is holidaying at the beach destination with her friends from the TV industry such as Rithvik Dhanjani, Srishty Rode and others. The actress, in her vacation album, has shared pictures of herself enjoying a pool breakfast and the “serenity” of Maldives. She started her holiday motto quite clearly in her posts: “Stay trippy, Lil hippie.” Sharing one of the photo albums, she wrote: “A good day is this view and a lot of yummy food.” The caption for another set of pictures read: “Trippy and hippie.”

Surbhi Jyoti’s photos from her vacation have now gone viral on social media. Check them out here:

Surbhi stars opposite Karan Singh Grover in Qubool Hai 2.0, a sequel to their first show together Qubool Hai. As per Surbhi, the television series is about “passion, power, politics, pain, and eternal love.” Karan and Surbhi reprise their respective roles as Asad Ahmed Khan and Zoya Farooqui.

Surbhi Jyoti rose to popularity for her performance in Qubool Hai. She has also featured in lead roles in TV shows like Ishqbaaz and Naagin 3.

Surbhi Jyoti made her debut in the entertainment industry with Punjabi films such as Kudi Punjab Di, Raula Pai Gaya, and Munde Patiala De. She used to work as an RJ in Punjab before she switched her career.

The actress has also worked in TV series like Koi Laut Ke Aaya Hai and Dev. She will next be seen in a film titled Sonam Gupta Bewafa Hai.