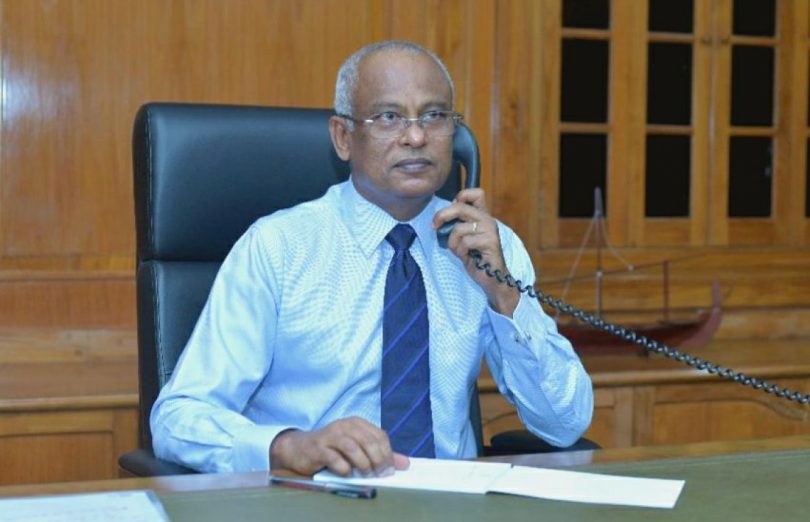 President Ibrahim Mohamed Solih shared the situation of Maldives amidst the COVID-19 pandemic with the foreign secretary of the United Kingdom, Dominic Raab, on Tuesday.

According to the President’s Office, President Solih and Foreign Secretary Raab discussed the impacts of the coronavirus on their respective countries and the measures taken by both to address and overcome the challenges.

President Solih noted that although a community spread was delayed for over a month since the first confirmed COVID-19 case in the Maldives on March 7, the number of positive cases increased exponentially in the capital city of Male’ after the first local transmission was detected on April 15. Shedding light on the measures taken by the government to contain the virus, he briefed the foreign secretary on the state of public health emergency announced March 12, and the lockdown imposed across the Greater Male’ Region from April 15.

He also touched upon other precautionary measures, such as social distancing, implemented across the nation in response to the pandemic. Moreover, the president stressed the vulnerability of small island developing states amid such a crisis, in particular noting the fiscal and economic repercussions of COVID-19 on the Maldives, which closed its borders on March 27, bringing the tourism industry, on which the country’s economy and GDP hinge, to a deadlock.

The president acknowledged the impact of the coronavirus in the UK and extended his good wishes to Prime Minister Boris Johnson, who recently recovered from COVID-19 and resumed duties this week.

President Solih also hailed the strong relations between the Maldives and the UK and thanked the British government for its assistance in expediting Maldives’ re-entry into the Commonwealth of Nations.