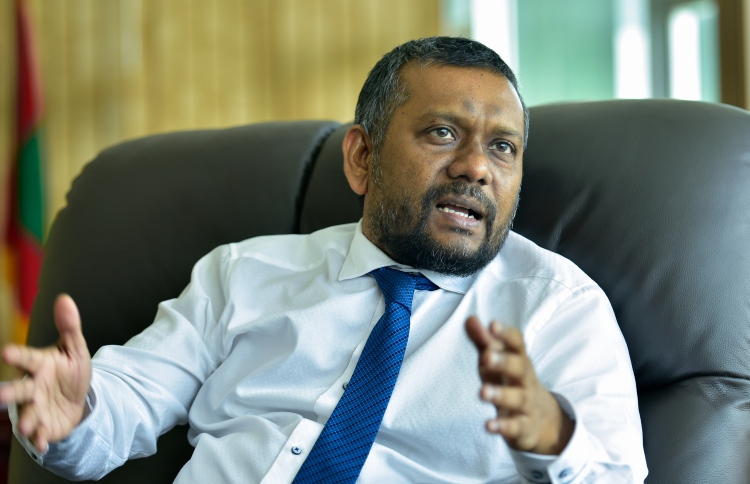 President Solih defended Minister Fayyaz and stated that he found no justification for the motion, declaring his complete trust in the minister.

He further claimed that the minister’s actions were yet to warrant such drastic measures, adding that he is yet to hear of any complaints pertaining to the minister. Presumably, this does not include the lack of action taken over allegations brought forth against said minister’s older brother, presently working at the president’s office.

According to local media Mihaaru, Speaker Nasheed is yet to acquire the sufficient amount of signatures required to pass a vote of no-confidence against.

While the speaker is currently, allegedly lobbying for Minister Fayyaz’s dismissal, certain members are reported to have directly rejected the request, with some members having avoided the matter altogether.

Later, the same concerns were raised by twitter user Alex Ahmed, a handle that has long been speculated to be Nasheed’s unofficial account. Shortly after the remarks about Fayyaz were made, Alex claimed publicly, with a previously unseen brazenness, that the account was run by Nasheed himself.

However, the exact reason behind efforts for a censure motion carried out against one of the most influential ministers within the current government has not been divulged by the speaker or any official source.

Responding to the claims, Fayyaz asserted that all of his efforts till date were in line with upholding the Solih-administration.

“I am spending all my time and doing everything I can to implement the president’s manifesto. I was under the impression that I have been working very well”, he said.

Fayyaz, who is a member of MDP, called his party members’ collecting signatures in an attempt to oust him a “baffling” development, claiming he was “not aware of any issues” that could lead to censure motion.

“… but they are parliament members. If they do not have confidence [in me], they will do what they [should] do. I have no problems with that”.

During the early months following Fayyaz’s current ministerial appointment, he was subject to brief controversy over Public Service Media (PSM)’s sudden settlement payment of MVR 30 million to Business Image Group (BIG), a company owned and operated by his family, as well as the appointment of his relatives to high ranking government posts.

At least 10 signatures are required to submit a no-confidence motion against a cabinet member. According to the Speaker, over 30 signatures have already been collected. However, information acquired by ‘Mihaaru’ refutes his claims.

Once the motion is submitted to Parliament, it will pass with a majority vote of 44 members or more.

As the biggest faction of the coalition government, MDP holds a super-majority, occupying 65 out of the total 87 seats, meaning that no legislation passes without MDP’s support.

Public ire continues to soar over the government’s lacklustre performance in actively reforming the many issues plaguing the political system, often citing a lack of political will in reference to the super-majority.

At this present time, the parliament’s Committee on Public Accounts has launched investigations into the Ministry of Health and Ministry of Tourism’s compliance audit reports, over allegations of corruption involved in expenses spent over the country’s COVID-19 response. The news has prompted several locals to voice concerns on social media regarding Health Minister Abdulla Ameen, along with various other individuals within the leadership, assumed to be implicated in the issue.