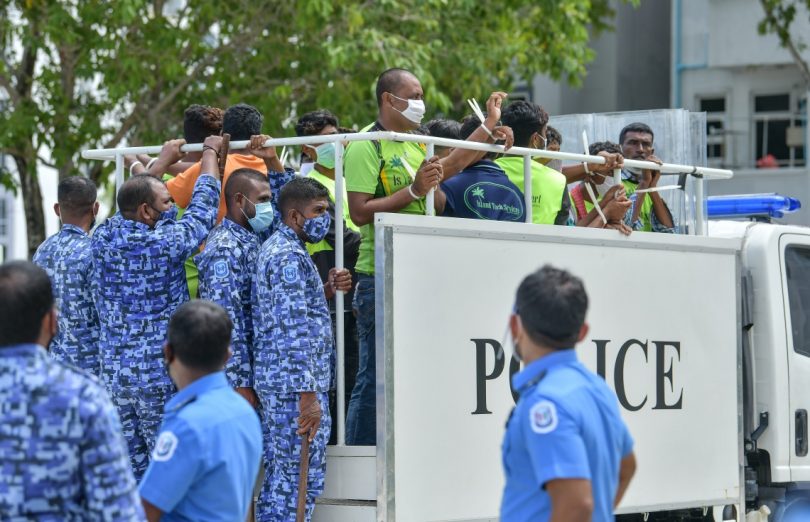 Maldives Police Service declared late Monday that strict legal action will be taken against those who committed violence in the protest held earlier in reclaimed suburb Hulhumale’.

Expatriate workers employed at Island Expert Pvt Ltd rioted on Monday morning, over several months of unpaid wages. Police arrested 41 expatriate workers from the protest, during which some participants had injured police officers, and damaged police vehicles and public property.

In a statement issued by the police regarding the protest, they strongly condemned “violent behaviors that put life and property of the public and security services at risk”.

Declaring that strict legal action will be taken against those that commit violence and unlawful activities, the police further asserted that they will not hesitate to take action against anyone who promote and commit violence in such situations.

“The Maldives Police Service advises not to resort to violence in the name of industrial conflicts and requests everyone to seek legal measures to resolve issues such as unpaid wages and other contractual disagreements between employees and employers”, they added.

The migrant workers at Island Expert Pvt Ltd were recruited to complete the construction work of flats in reclaimed suburb Hulhumale’ for MNDF and Police personnel in 2012.

Island Expert employees also protested over the issue of unpaid salaries on July 7, June 25 and in April 2018.

After the protest on July 7, Island Expert’s Managing Director Anon Songpanya admitted that employees were not paid since the implementation of lock down measures across the Greater Male’ Region, attributing delays in salary payment to numerous challenges posed by the ongoing COVID-19 pandemic.

However, on July 9, the MD asserted that distribution of salaries had begun, and assured that “they [the expats] will not stage demonstrations on the road anymore”.

In the wake of Monday’s protest, local media Mihaaru reported that MD Songpanya stated that the latest incident was not over unpaid wages as Island Expert has negotiated a solution and already settled a month’s salary. He reportedly alleged that the protest was orchestrated by a few who had spread false information among the rest of the staff.

Recently, expat-led demonstrations have taken place amidst renewed concerns from rights groups as well as the general public, over the continued exploitation of expatriate workers in Maldives.

Violations reported include including human trafficking, withholding of wages, poor living conditions, and other human rights violations. Further, the aforementioned low quality of life has cemented the disproportionate effect had by Maldives’ ongoing COVID-19 outbreak on its vast migrant population.