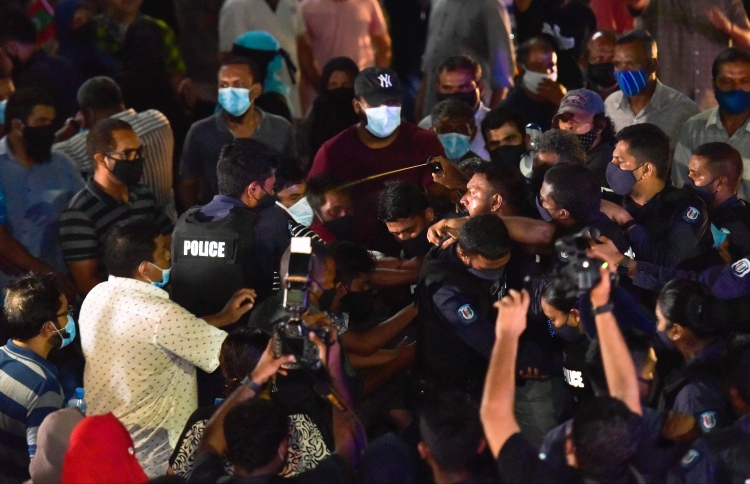 In the wake of opposition protests this week, Maldives Police Service urged against public gatherings that violate the COVID-19 safety guidelines set by the Health Protection Agency (HPA).

In a statement released late Tuesday, the police highlighted that HPA has warned against assemblies of more than 30 people within the Greater Male’ Region until the ongoing state of public health emergency expires on August 7.

Touching upon the recent resurgence of positive cases among the public as well as frontline law enforcement officers, the police noted that several individuals that participated in recent gatherings did not observe safety protocols such as physical distancing and the wearing of face masks.

Thus, the police called to adhere to safety guidelines implemented by the authorities to protect public health, further urging to express opinion and speech in accordance with the appropriate lawful measures in current circumstances.

Moreover, the police also urged media representatives covering protests and gatherings to follow COVID-19 safety guidelines, as well as to carry the press card issued by the Maldives Broadcasting Commission (Broadcom) at all times.

The police further assured that their media officials would operate on the scene of gatherings to help solve difficulties faced by reporters and journalists and facilitate media coverage as closely as possible. The police urged reporters to share any difficulties they face with such officials or to contact police media via phone call.

The police statement comes amid protests held by the opposition coalition, Progressive Party of Maldives and People’s National Congress, this week calling for the release of former President Abdulla Yameen Abdul Gayoom. The demonstrations had resulted in clashes and various arrests, while the opposition also faced criticism over lack of physical distancing and several protestors not wearing face masks.

Maldives Media Council (MMC) also released a statement this week, criticising the authorities over obstructing journalists and reporters from closely covering the recent gatherings. The council had referred to Article (e) of Section 43 of the Freedom of Peaceful Assembly Act, which states that the police cannot order the obstruction of media, even during an ongoing protest.

Meanwhile, the Ministry of Home Affairs on July 14 decided to prohibit all public gatherings held across the Greater Male’ Region without prior written approval by Maldives Police Service, with the exception of the carnival area in Male’.

This decision, which was made under the contentious amendment to the Peaceful Assembly Act 2013 ratified during former President Abdulla Yameen Abdul Gayoom’s administration, has been condemned as a violation of fundamental rights by several local activists, rights groups and the international NGO Human Rights Watch.