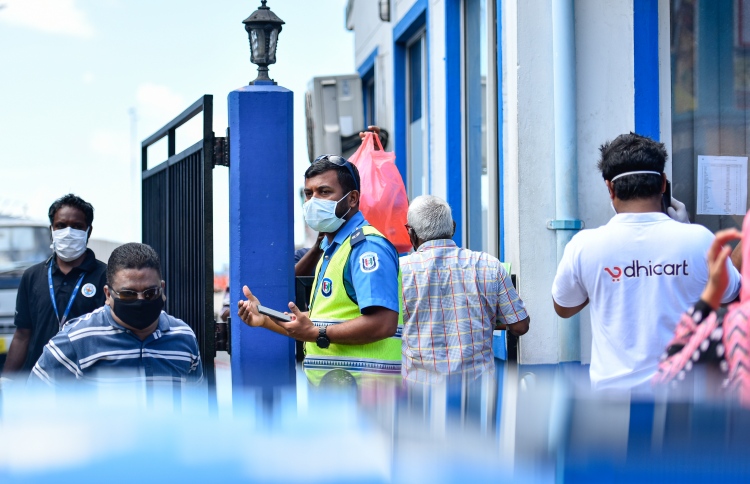 Maldives Police Service released Friday’s statistics, confirming that a total of 109 individuals were fined and five were arrested for violating lockdown orders in the greater Male’ region on April 24.

According to the police, 101 of those who incurred fines were from Male’ while four individuals were fined in both Vilimale’ and reclaimed suburb Hulhumale’.

The number of fines imposed on Friday, which coincided with the first day of Ramadan, was noted to be highest recorded on a single date.

Overall, a total of 461 fines were levied, with 404 individuals violating lockdown measures in Male’, 30 in Hulhumale’ and 27 in Vilimale’.

Additionally, Police also confirmed that 60 permits were issued for delivery purposes on Friday, bringing the total number of permits issued amidst the lockdown to a total of 4322.

Authorities have stated that those who leave their homes without clearance during the lockdown period will be fined MVR 1,000.

Individuals that repeatedly violate the regulations enacted on the greater Male’ region will be taken into custody.

With the first confirmed case of ‘community spread’, Male’, Villimale’ and Hulhumale’ were placed under lockdown as a precautionary measure to contain the outbreak and allow for feasible contact tracing.

The initial case of COVID-19 reported in the capital city of Male’, was recorded on April 15, involving a local woman that sought assistance from a flu clinic in Malé after developing symptoms.

The Maldives now records 141 positive cases, two probable and 125 active cases of COVID-19, with a total of 16 recoveries.

The World Health Organization (WHO) has classified the spread of COVID-19 as a global pandemic. The novel coronavirus has infected over 2.8 million people and claimed over 199,500 lives around the world. However, out of those infected, more than 816,440 people have recovered.