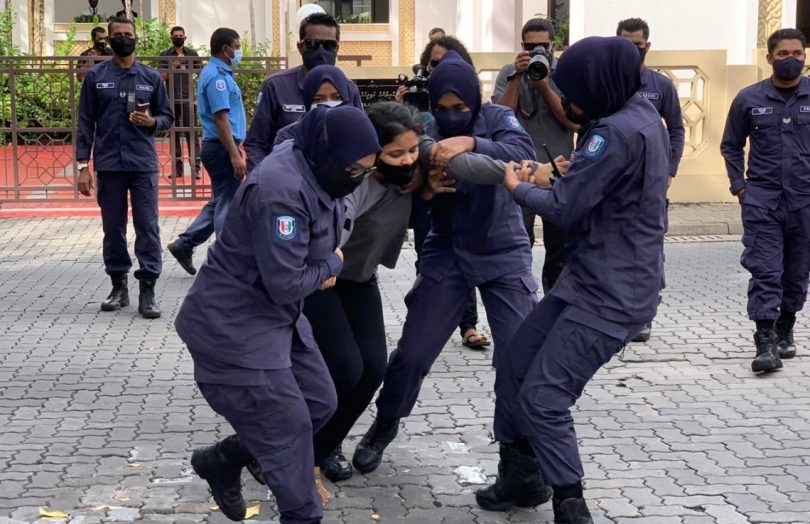 Maldives Police Service on Monday dispersed a small gathering of protesters that assembled in front of the Parliament building with a list of demands from the people.

A total of 12 individuals gathered in front of the Parliament building at 0830hrs with banners and signboards, demanding lawmakers to find solutions for groups of people penalised by the COVID-19 pandemic, amongst other issues. 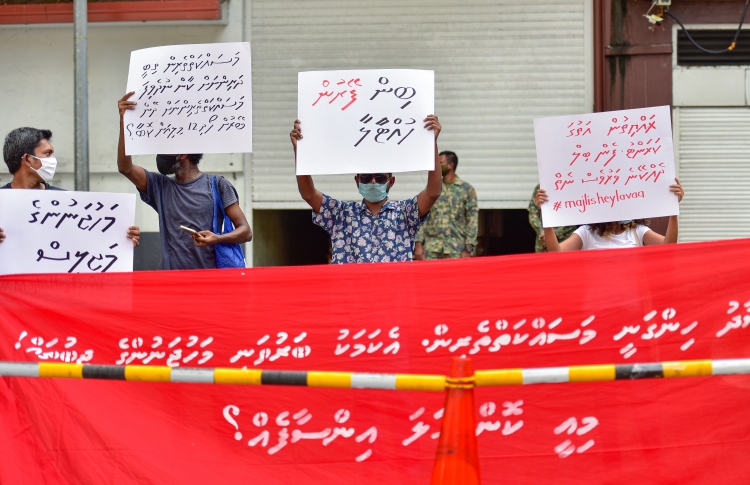 Participants of “Majlis Heylavvaa” protest organised by Navaanavai holding up banners and signboards in front of the Parliament. PHOTO: AHMED AWSHAN ILYAS

Although the demonstration was peaceful and no arrests were made, police forced back the participants almost immediately, stating that the protestors were gathered in a green zone.

According to the organisers, approximately 50 police personnel were present at the scene.

Videos posted by Navaanavai show police dragging protestors away by all four limbs.

More and more people are being forced into homelessness, having to survive with no income, living with extreme distress. But what’s the Maldivian State’s priority? Send @PoliceMv to brutally stop protesters trying to uphold the State accountable#MajlisHeylavvaa #AniyaNukuraashey pic.twitter.com/hw7hLfidM5

Video of police removing a protester in front of the parliament. VIA: TWITTER

However, organisers confirmed that no individuals sustained injuries in the confrontations.

Founder Member and Spokesperson of Navaanavai Fathimath Saaira told The Edition that the day’s events already demonstrated the extent to which the incumbent government stands opposed to leftist movements.

Noting that ‘Navanavaai’ fights for the rights of the common people, Saaira spoke about the lack of parliamentary response, in addressing the concerns put forth by the public, especially concerning the difficulties posed by the ongoing health crisis.

During Monday’s protest, Navaanavai called for the justice of resort workers on no-pay and evicted tenants who can no longer afford rent.

The movement also demanded the government to disburse the funds provided by international partners to its rightful workers.

Saaira stated that Navaanavai has yet to receive a response from parliament representatives for their demands.

When they were forced away from the Parliament building, the protestors regrouped near Hotel Jen, dubbing legislative body as a “Capitalist’s Parliament”, that only acts in favour of corporate interests. 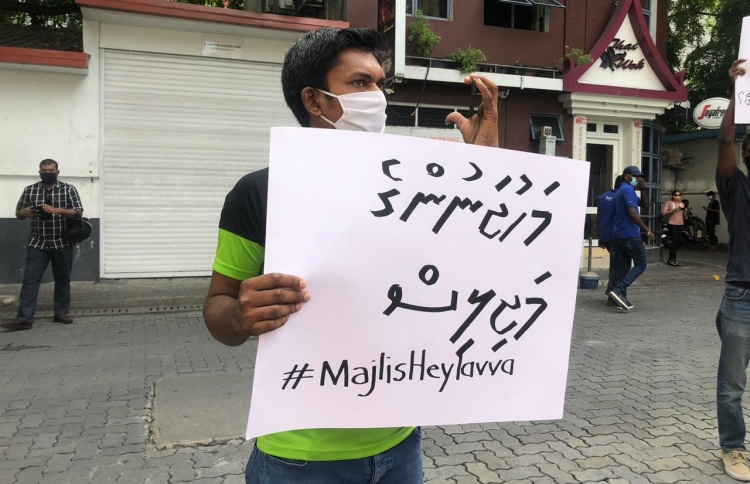 Gatherings are prohibited under the ongoing state of public health, which was declared by Maldives’ Health Protection Agency (HPA) in March. The HPA advises that all persons stay home unless absolutely necessary, in order to minimise risk and reduce the community spread of COVID-19.

However, Saaira offered the following justification for the movement’s venture outdoors. The activist stated that for many, staying home at a time when workers are subjected to pay cuts and unlawful terminations without any compensation, resulting in their families being evicted over delays in paying rent – was not feasible either.

“It is risky for us to stay at home too”, she said.

Adding that the protests would continue, Saaira affirmed that she and Navanavaai will keep fighting for the rights of the oppressed and work to hold the state accountable.

Protesters gathered near Dharumavantha School at 1330hrs to confront MPs after the conclusion of Monday’s Parliament session.

The first phase of the rapid livelihood assessment conducted by the Ministry of Economic Development in collaboration with UNDP revealed that more than 45,000 employees in tourist resorts alone are directly affected due to the pandemic.

By May 12, the Human Rights Commission of Maldives (HRCM) stated that 12 individuals were forcibly evicted for failure to pay rent.

Amidst more reported evictions and the public’s demands for a solution to the issue, a sunset bill was submitted to parliament by the representative of Fuvahmulah Central Constituency MP Hussain Mohamed Didi on behalf of the state, mandating landlords to issue at least two months of notice before evicting tenants amidst the financial crisis caused due to the ongoing COVID-19 pandemic.

However, as yet, no solutions have been offered to the people, over the aforementioned issues by any decision-making body in the Maldives.