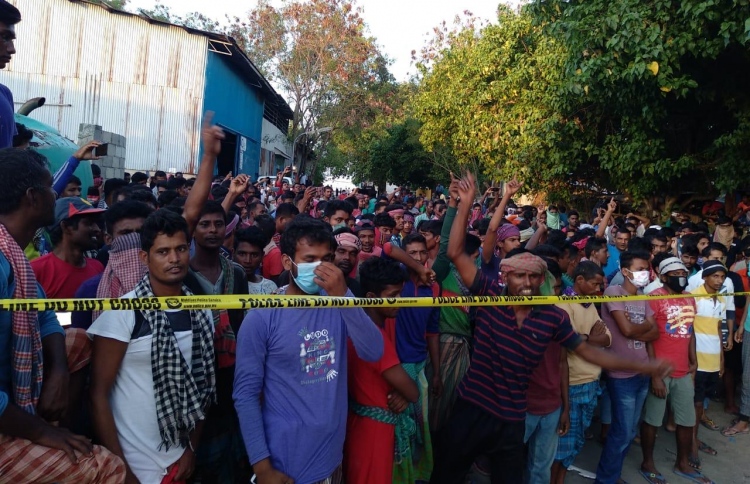 Maldives Police Service, on Tuesday, arrested seven expatriates in Thilafushi, Kaafu Atoll, in a joint operation conducted with Maldives National Defence Force (MNDF), after Police personnel were assaulted in a heated dispute following a period of protests by the workers.

Authorities received a report of workers damaging the godown of their sponsor on Tuesday afternoon, upon which officers attended the scene.

According to Police, officers on the scene were assaulted by expatriates, resulting in two policemen sustaining injuries.

Following the clashes, Special Operations officers arrived at Thilafushi around 1630hrs and took 133 expatriates into custody. However, Police revealed that 126 of them were later released.

Authorities confirmed that the seven expatriates under arrest due to the disputes are all Indian nationals.

Answering questions posed by news media, Police confirmed that no officers were held hostage in the disputes.

Authorities have yet to reveal further information about the matter, but assured that an investigation is ongoing.

Local media Mihaaru reported that the migrant workers rioted following the death of an ex-pat who succumbed to a heart attack on Monday night. He passed away while they were attempting to take him to the hospital.

Prior to this incident, expatriate workers at a local construction company have been protesting in Thilafushi for days, with a group of workers gathering around Thilafushi Police Station at the end of May and raising their voices as well.

According to reports from Mihaaru, the migrant workers leading the protests were brought to Thilafushi after a dispute in a resort, which is under construction by the aforementioned local company. Most of the ex-pats are said to be Indian and Bangladeshi citizens.

The workers were protesting due to their poor living conditions at Thilafushi, in addition to not receiving one month’s salary, Mihaaru wrote. Citing credible sources, the local media stated that the workers were accommodated in a company go-down.

Although the ex-pat who died on Monday night does not belong to the construction company, Mihaaru reports that his death sparked more concerns amongst the migrant workers, igniting fresh protests on Tuesday.

Authorities have yet to release any details about the protests, including the demands made by the workers. Till now, the local construction company has not disclosed any information on why the ex-pats were relocated from the resort to Thilafushi, or why they were protesting.

During earlier protests, the migrant workers were not seen to exercise the safety measures put forward to contain the spread of COVID-19, with very few wearing masks in a close-knit gathering of hundreds of protestors.

The COVID-19 outbreak in the Maldives’ capital has disproportionately affected its migrant worker population, the majority of whom are Bangladeshi nationals living in highly congested quarters where it is impossible to reduce contact or exercise social distancing. Their often small-spaced living conditions have been described by local and international civil society organizations as, “claustrophobic”, “unsanitary” and “overcrowded”.

The Maldives recorded its first case involving a migrant worker, who was from Bangladesh, on April 19. Since, the total number of Bangladeshi workers that have tested positive for COVID-19 has surpassed 1,000, while 186 Indian nationals have contracted the virus as well.

Presently, Maldives records 1,829 confirmed cases of COVID-19 with 1,334 active cases, 488 recoveries and seven fatalities. Capital Malé, one of the most densely populated places in the world, has recorded a significant increase in COVID-19 cases since recording its first local transmission on April 15.

The World Health Organization has classified the spread of COVID-19 as a global pandemic. The new strain of novel coronavirus has infected over 6.3 million people and claimed over 378,065 lives around the world. However, 2.9 million people have recovered from the infection.