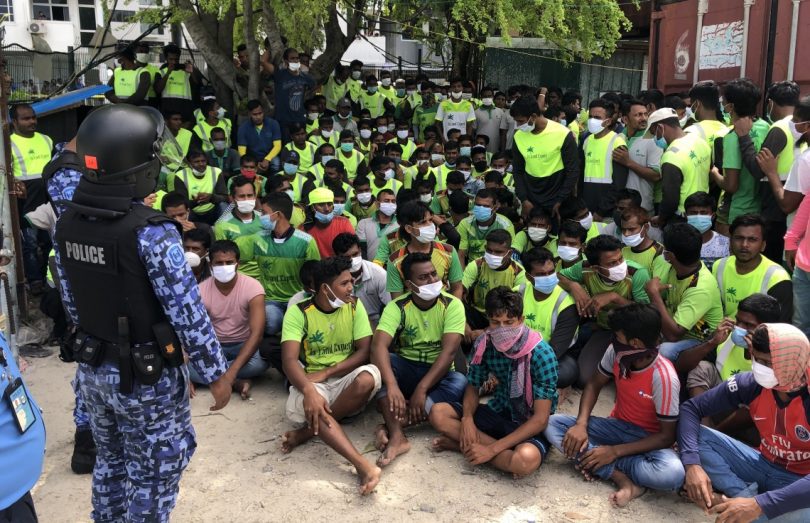 According to the police, officers and police vehicles were damaged during the protest in the reclaimed suburb of Hulhumale’.

The police stated that the protest was successfully brought under control and that protestors were now being kept in Island Expert’s labour quarters.

It was further revealed that a team from the Special Operations Department’s Public Safety and Response Unit was operating on the scene.

The migrant workers were recruited to complete the construction work of flats in reclaimed suburb Hulhumale’ for MNDF and Police personnel in 2012.

Island Expert’s Managing Director Anon Songpanya previously admitted that no employees were paid since the implementation of lockdown measures, attributing delays in salary payment to numerous challenges posed by the ongoing COVID-19 pandemic.

On July 9, the MD had asserted that distribution of salaries had begun, assuring that “they [the expats] will not stage demonstrations on the road anymore”.

Island expert employees also protested over the same issue on July 7, June 25 and in April 2018.

However, as per local media reports from the most recent protest, the workers state that Island Expert only paid a small fraction of the total sum of unpaid wages.

Although the Thai company attempted to sell off capital to arrange the salary for migrant staff, local media outlets reported that Maldives National Defence Force (MNDF)’s company SIFCO and Maldives Police Service Company (POLCO) had blocked any attempts to sell capital belonging to the two companies on July 9.

Advance payments for the flats have already been deducted from the police and military personnel who are set to receive the flats upon completion.

Violations reported include including human trafficking, withholding of wages, poor living conditions, and other human rights violations. Further, the aforementioned low quality of life has cemented the disproportionate effect had by Maldives’ ongoing COVID-19 outbreak on its vast migrant population.