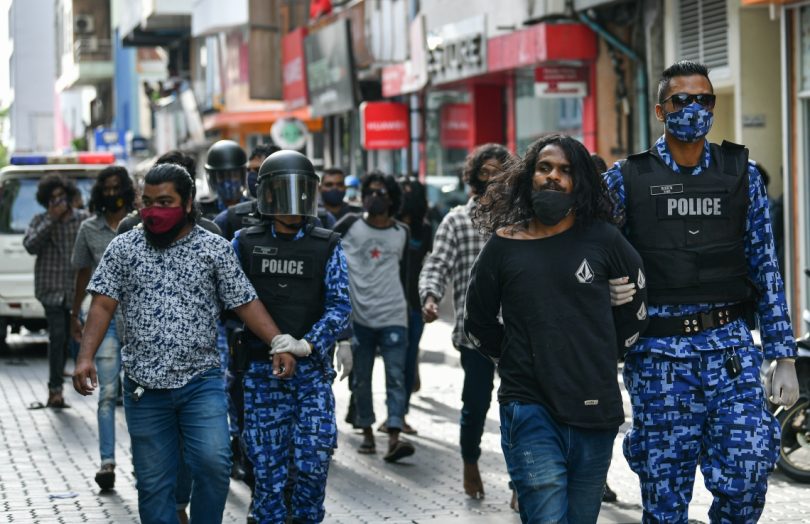 Maldives Police Service, on Saturday, arrested 41 individuals during a protest by opposition forces.

In addition to those arrested and fined, authorities also towed multiple vehicles at the motorcycle rally.

Leaders of the opposition alliance of Progressive Party of Maldives (PPM) and People’s National Congress (PNC) touted the move as politically motivated and later claimed that the protest was organized of the coalition.

The coalition further noted it was their civic responsibility to extend support to such causes and would continue to do so in the future.

Prior to the protest, Police had warned of such measures to be taken, if protesters act in violation of COVID-19 safety guidelines.

Although the opposition maintained that the protest was not motorcycle rally, senior coalition members were seen on motorcycles before protesters took off near Rasfannu Artificial Beach, on the western end of the capital city Male’.

Following the arrests, opposition forces gathered near the main office of PPM on the eastern end of the capital.

Despite the opposition alliance formerly affirming that protests will not be held in the Greater Male’ Region, a large number of participants joined the motorcycle rally that took place on the capital’s street on Saturday, as well as on August 28.

Unlike this protest, Police did not attempt to disrupt the previously held rally on August 28, even amid reports of prominent members of the opposition parties refusing to don mandatory face masks during the demonstrations.

As the COVID-19 risk level for the island nation is currently at an alarming level, authorities are constantly requesting the public to adhere to safety guidelines and prevent further spread of the virus.

Speaking at a press briefing held by the Health Emergency Operations Centre (HEOC) in August, Chief Superintendent of Police Abdulla Shareef asserted that holding protests and demonstrations are prohibited under the current circumstances, adding that police personnel need to be quarantined and isolated due to attending such matters.