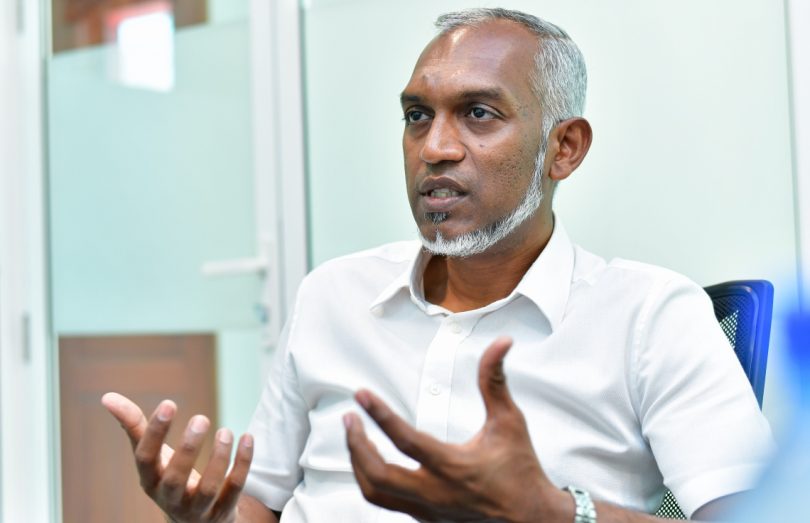 The charges were filed at Criminal Court, over Muizzu’s alleged falsifying of statements in the case of State versus Noomadi Resorts and Residences Maldives on June 25, 2019.

Noomadi filed cases against the Maldivian state at the Permanent Court of Arbitration (PCA) located in The Hague, Netherlands, claiming USD 155 million (MVR 2.3 billion) and additional costs related to the arbitration process as compensation for unlawful termination of two contracts by the former government.

Maldivian government signed its first agreement with Noomadi on January 20, 2011, for the construction of 600 housing units. The government signed a second agreement with the company on May 30, 2013, for the construction of 500 additional housing units, development of the Maldives Police Service’s Police Academy Phase One, and the establishment of sewerage systems on three islands.

According to PG Office, during the arbitration case, former housing minister Muizzu provided falsified witness statements for Noomadi, claiming that the company had continued to work on both the agreements, as per schedule, without any delays.

PG Office’s statement also added that Muizzu denied being present in a particular meeting held to discuss the return of Dhiffushimaadhoo in Lhaviyani Atoll, which was leased to Noomadi for the development of luxury villas.

Quoting these two aforementioned falsifications, PG Office charged the former Housing Minister with perjury, a Class 1 Misdemeanor under Article 520 of the Penal Code.

If found guilty, Muizzu can face up to one year of imprisonment.

Some top officials of the current administration had previously claimed that former minister Muizzu admitted that the government pulled the plug on Noomadi’s projects in violation of the agreement. They also allege that Muizzu addressed a document to the arbitration firm stating that the agreements were annulled on former President Yameen’s orders.

Following the conclusion of the arbitration case at PCA, the Maldivian government signed an agreement with Noomadi on August 25, 2019, to settle the issue out of court with a payment of USD 55 million (approximately MVR 849,750,000).

The incumbent administration completed the full payment owed to Noomadi on February 12, 2020. Speaking at a Parliament session, Minister of Finance Ibrahim Ameer confirmed that the first payment of USD 27.5 million was deposited in September 2019, while the remaining half was paid in February 2020.

In December 2019, the Parliament’s Committee on Economic Affairs launched an investigation into determining whether Muizzu derived unlawful financial gains from the Noomadi case. During the probe, Hanimaadhoo MP Abdul Ghafoor stated that the case should be submitted to the Anti-Corruption Commission (ACC), the Auditor General’s Office and Police despite the fact that it was settled.