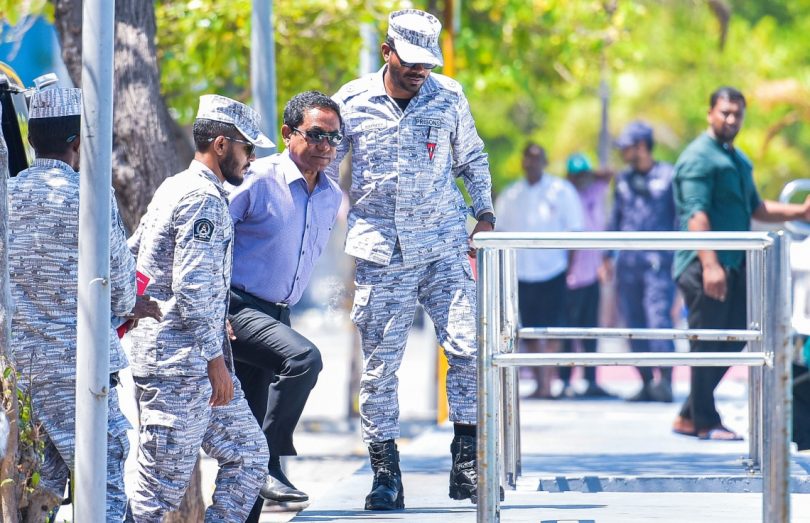 Both Sun Construction and Sun Investment were charged under Article 5, Section (a), Article 53, Section (a) and (b) as well as Article 58, Section (a) of the Money Laundering Act.

Another individual implicated in the Fuhgiri case, Ahmed Kirk Risha, faces charges under Article 7, Section (a) and (b) of the Prevention and Prohibition of Corruption Act in addition to the same money laundering charges lodged against the former president.

The investigation into the case was conducted by Maldives Police Service, the Anti-Corruption Commission and the Presidential Commission on Corruption and Asset Recovery.

The PG Office commended the efforts of investigators who were assigned to the case, particularly noting the capability and skill of Senior Investigation Officer Arif Rasheed from the Presidential Commission.

The state is currently attempting to recover USD 1.3 million (MVR 20.8 million) acquired through money laundering, an additional USD 2.2 million (MVR 35.3 million) deposited with the laundered funds and a sum of USD 34.6 million (MVR 534 million) in fines.

In December 2019, the Criminal Court sentenced Yameen to five years in prison and imposed a fine of USD 5 million on money laundering charges concerning the embezzlement of MVR 3.3 billion from Maldives Marketing and Public Relations Corporation (MMPRC).

He was convicted of money laundering over a transaction that involved a deposit of USD 1 million by SOF Pvt Ltd, to his personal account at Maldives Islamic Bank (MIB).