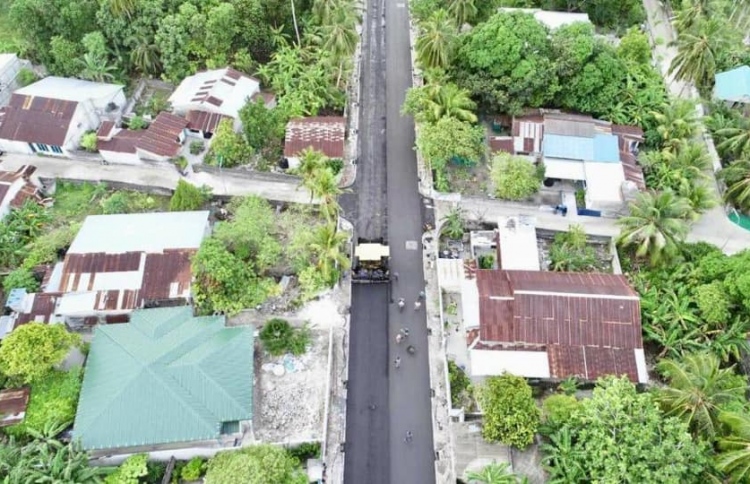 Maldives Transport and Contracting Company Plc (MTCC) confirmed on Wednesday, that the ongoing work to pave the main road along Addu City’s Hulhudhoo and Meedhoo was presently set to conclude by the end of August.

The company revealed that approximately 80 per cent of the 2.2 km long ’Bahaudheen’ road was now complete, asphalt paving laid out to 50 mm thickness across the area, with only the final steps remaining.

The project was awarded to MTCC by the Ministry of Planning and Infrastructure on March 27, 2019, and the company commenced work the following April. At the time, MTCC declared that the construction would conclude within eight months.

Nevertheless, the ongoing COVID19 pandemic has pushed back state-plans across the board, particularly for construction-related projects, as efforts were rerouted to the country’s emergency health response.

In its initial phase, opinions remained divided on the infrastructure project, with some islanders wishing to restore and retain the road’s original beauty, inlaid with trees in the centre.

This is how Hulhumeedhoo main road used to look like once. It is so heart breaking to know that all these trees were cut down. We didn’t have to walk home from school all hot and sweaty back then. Now it’s like walking on fire. I bet this is the tharaggee every one wants. 😔 pic.twitter.com/NZDbWDO3Pw

Others argued that the trees contributed debris, and complained of the frequent puddles caused by lack of drainage systems along the road, which led to difficulties for pedestrians and vehicles alike

Translation: This is the state of roads in Meedhoo and Maradhoo-Feydhoo, that the Housing Ministry is tasked with overseeing. There’s grass in the middle of the path, and mud. Muiz [refers to previous Ministry of Housing]. please remedy the issue. The tweet above was made by the current MP for the Meedhoo constituency Rozaina Adam, in 2016.

Previously, attempts were also allegedly made by administrations to pave the island’s main road, but the projects were abandoned. Successes include a number of paved roads throughout the island.

Although administratively part of Addu City, the island (often dubbed ‘Hulhumeedhoo’) is home to two settlements ‘Hulhudhoo’ and ‘Meedhoo’, and lies roughly 17 km away from other islands within Addu City, to the east of the atoll.

Hithadhoo, Maradhoo, Maradhoo-Feydhoo, Feydhoo and Gan, which make up the rest of Addu City, are linked via a 16 km causeway known as ‘Addu Link Road’ – the second-largest such road in the country.

As plans move forward to complete road work in Hulhudhoo and Meedhoo, the government has pledged further infrastructure development throughout all of Addu City’s districts.

This includes the construction of roads amounting to 25 km, with assistance from the Indian government.

Recently in March, the planning ministry once more awarded a project in Hulhumeedhoo to MTCC, this time to develop a harbour in Hulhudhoo for MVR 65 million.