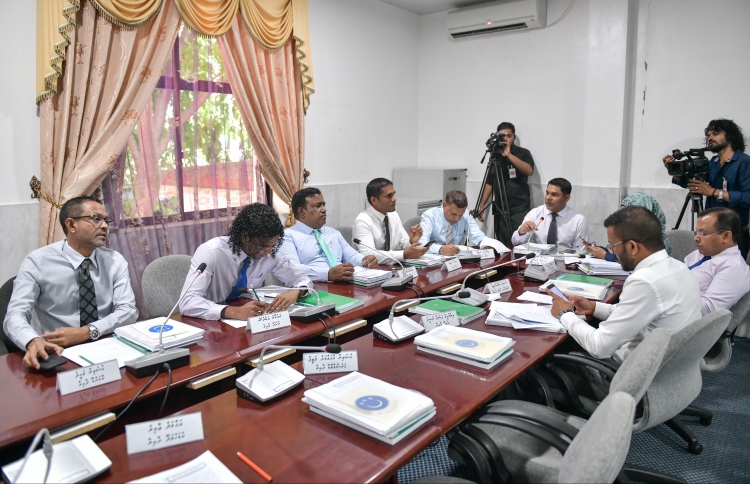 The Parliament’s Public Finance Committee, on Sunday, confirmed a salary of MVR 35,000 for the Children’s Ombudsman.

Prior to the decision, a number of committee members raised concerns about posting remuneration for the job, at a time during which the government is reducing salaries of state-appointed employees, in response to the global economic regression brought forth by the ongoing COVID-19 pandemic.

However, the appointment of a Children’s Ombudsman is a crucial component to the implementation of the amended Child Rights Protection Act, which came into effect on February 20, this year.

The formation of a Child Rights Protection Council, Child and Family Protection Service and the appointment of a Children’s Ombudsman tasked with overseeing the bill’s implementation is stipulated.

An important aspect of Ombudsman duties is the power to regulate which information is communicated to the public, therefore protecting the privacy and security of the child in question.

Following an evaluation of president-nominated candidates for the role, the Ombudsman will be approved via a simple majority approval by the Parliament.

Despite President Solih’s passionate pledge to protect the rights of Maldivian children following January’s surge in cases, after reports of a 2-year-old who was sexually abused by a family member surfaced, and although UNFPA and other relevant bodies have stressed on the added risk for vulnerable persons during the imposed lockdown, the President has not yet moved to appoint a person for the post.

Furthermore, the Ministry of Finance recommended a salary of MVR 45,000 – an amount equivalent to the salaries allocated for other presidents of independent committees, along with the same benefits.

Nevertheless, during the committee meeting held on Sunday, ruling Maldivian Democratic Party member and representative for Addu City’s Hulhudhoo constituency MP Ilyas Labeeb opposed the salary, stating the amount to be “too high” in relation to the responsibilities of the job. MP Ilyas then suggested a base salary of MVR 25,000 along with an allowance of MVR 10,000. Seconded by MDP representative for Huvadhoo Atoll’s Dhaandhoo constituency MP Yauqoob Abdullah, the decision was then set in stone by the unanimous agreement of all members present.

Given the risks faced by persons working in sensitive areas of the law, where decisions made affect families deeply and can provoke severe reactions, it is reasonable to suggest that any person filling the Ombudsperson position may be faced with similar circumstances or risk to themselves, not unlike the leaders of other independent bodies tasked with oversight matters.

“The people are not concerned about having anyone appointed to such a position. Maldivians are concerned with matters such as returning to their home island and acquiring loans. Appointing a person to this position at a time would become an obstacle to the state” said MDP MP for Haa Dhaalu’s Hanimaadhoo constituency, Abdul Ghafoor Moosa.

Parliament members are accorded a salary of MVR 85,000 and despite cost-cutting measures implemented in response to COVID-19, take home MVR 68,000. Similar figures represent the earnings of multiple state ministers and political appointees, with arguably fewer responsibilities.

Unanimously approved on November 14 by the 66 MPs in attendance, the Child Rights Protection Bill strongly prohibits inhumane actions against children in homes, education centres or an institution where children are kept. It outlines the duties of the state, community and parents to protect children’s rights. It should be noted that for a position such as a Child Right’s Ombudsman, the impact of work done by a person in such a position, differs based on the appointee’s competency and the prevalence of issues in the country. For instance, in France, their Ombudsman has condemned the treatment of migrant children, by publishing a formal report calling on the state to act on the issue and holding them accountable.

In the Maldives, the Ministry of Gender itself has formerly iterated a lack of resources and capacity to implement certain processes. Historically, Maldives holds a record of failing to proactively step in and protect its children – it has only been a little over a decade since the country criminalised paedophilia.

MP Ibrahim Shareef of Addu City’s Maradhoo constituency countered by stating that meeting any provision laid out by a previously passed act is mandatory for the state. Presently, due to the COVID-19 crisis, the government has announced a 20 per cent reduction in salaries of the President, Vice President, his Cabinet of Ministers, Parliament Members, Judges and that of Independent Institutions.