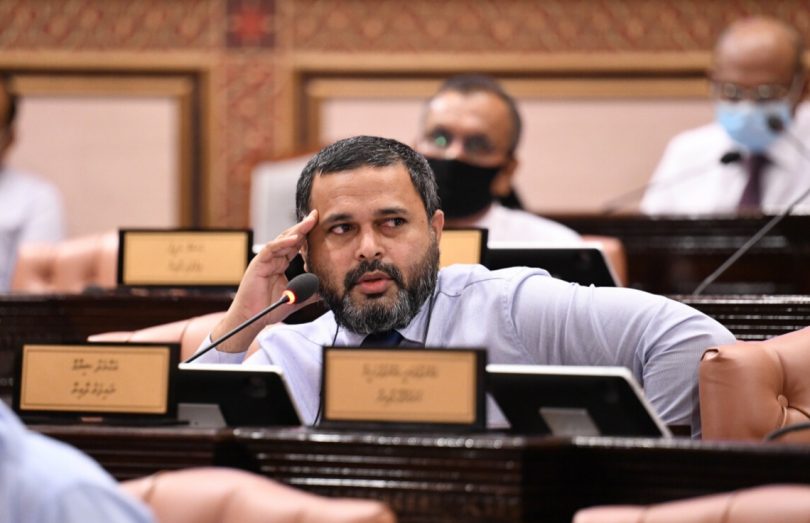 The MDP-supermajority-held Parliament, on Wednesday, tossed out the Emergency Motion submitted by the opposition faction, demanding that the state disclose details of the agreements made between the militaries of Maldives and the Asian superpower India.

Progressive Party of Maldives (PPM) member of Lhaviyani Atoll’s Naifaru constituency, Ahmed Shiyam, submitted the motion over concerns that the agreements signed between the two neighbouring countries may jeopardise Maldives’ freedom and sovereignty.

Shiyam’s concerns mainly extended to the Dornier aircraft, recently gifted by India to the Maldives, four-years after the agreement was signed during former President Abdulla Yameen Abdul Gayoom’s administration.

Noting that a number of Indian military personnel are presently stationed in the Maldives for the operation and maintenance of the aircraft, MP Shiyam underlined that the government has, however, failed to disclose the details of the deal.

The Police academy under construction at Addu in the southern Maldives, funded by Indian aid, was another point of concern highlighted in PPM’s Vice President Shiyam’s statement.

Speaker of Parliament and former President Mohamed Nasheed shot down the opposition’s Emergency Motion, declaring that matters revolving around national security and foreign relations are pertinent to the incumbent President Ibrahim Mohamed Solih, as the state’s Commander in Chief.

Adding that Parliamentary approval is requested for any agreements relevant to the public, Nasheed asserted his confidence in the state, adding that all such agreements would be signed with the lawmakers’ backing.

Nasheed further told Shiyam that he could get access to the information through the Parliamentary Committee on National Security.

Citing the aforementioned points, Nasheed announced that he believes “this emergency motion cannot be accepted by the Parliament”.

Nasheed’s rejection was met with strong disagreement from the opposition, with MP Shiyam marking the day as one where “the Parliament took a step back from democracy”.

The PPM VP further suggested the Parliament be locked up for the duration that the current administration held power.

Parliament member of Kaafu Atoll’s Kaashidhoo constituency Abdulla Jabir, notorious for his confrontational nature as a lawmaker, also questioned the Speaker’s decision, demanding to know the Section in the Parliament Act which supports it.

Nasheed, who has drawn heavy public criticism during the Solih administration replied that he had the opportunity to make such decisions under any Section of the Act.

He also questioned Shiyam’s choice of submitting an Emergency Motion, over an “ongoing” matter “started by their [PPM’s] government”.

As the controversial matter continues to gain momentum, drawing backlash from the opposition faction as well as other concerned citizens and journalists, Nasheed maintains his belief that the military relations in particular, between the two neighbouring nations, were fostered during the previous government, alluding to the fact that agreements were signed during Yaameen’s tenure.

He also repeatedly accused the #IndiaOut movement, calling to send off the Indian military personnel stationed in the Maldives, of being led by a group of religious extremists.

Certain media reports have stated that a group of Indian army forces recently arrived at Hanimaadhoo in Haa Dhaalu Atoll, in addition to the Indian officers that are already in the Maldives to operate the helicopters, and Dornier craft, gifted to Maldives National Defence Force (MNDF) by the Indian military.

Repeatedly denying any form of foreign military presence, Chief of Defence Force Major General Abdulla Shamaal assured last month that only “technicians, technical personnel serving humanitarian purposes [and those] aiding us and fulfilling our needs are working in the Maldives”.

Although deals were made between the military forces, Maldives and India’s bilateral relationship was described to be deteriorating in ex-President Yameen’s government as diplomatic relations with China funded a majority of the development projects initiated by the previous government.

However, the Maldives-India friendship was observed to improve greatly following President Solih’s victory in the 2018 elections, with India extending various loans and aid for Maldives’ development.