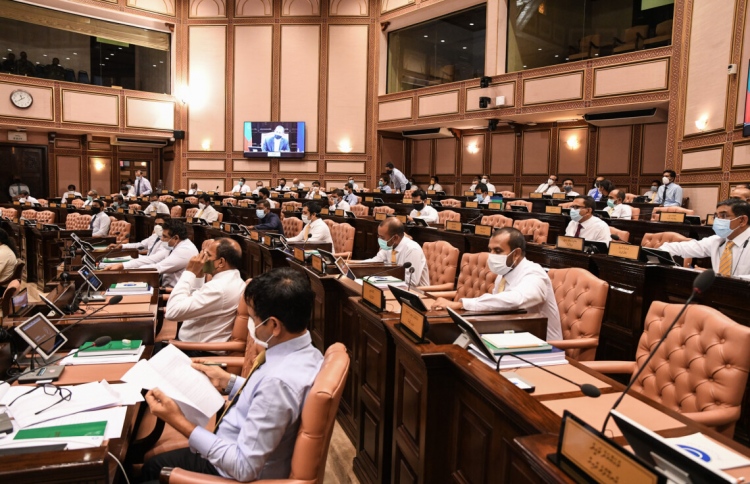 The parliament approved amendments to Article 231 of the Constitution of Maldives in the early hours of Tuesday, thus extending the length of terms for incumbent local councils.

The bill was lobbied by the government last month, as the Local Council Elections originally slated for April 14 were postponed indefinitely due to the ongoing COVID-19 health crisis. The terms of the presently elected councils will expire on June 3, Wednesday.

During the first parliamentary sitting to be held after midnight, the bill was passed at approximately 0245 hrs with a majority of 74 votes. Constitutional amendments require the majority vote of three-fourths or 66 votes of the parliament. The ruling Maldivian Democratic Party (MDP) presently holds a supermajority of 65 seats, and the party had issued a three-line whip prior to the vote to approve the bill.

The newly approved amendment adds a clause to Article 231, extending the incumbent council terms until new councillors are elected. However, the amendment stipulates that the parliament must approve a special set of laws regarding the powers accorded to councils during the extended period.

Concluding the sitting, Speaker of Parliament and former president Mohamed Nasheed declared that the proceedings turned out successfully as he had predicted and congratulated President Ibrahim Mohamed Solih, assuring that the bill would be presented for ratification as soon as possible.

Adding that the parliament had received “very slim chances” at reaching a decision on the issue, he thanked the lawmakers for their cooperation.

The voting on the bill was delayed on a number of counts, beginning on April 6 when Speaker Nasheed had compared the ongoing ‘State of Public Health Emergency’ to a ‘State of Emergency’ declared by the President, casting doubt on whether constitutional amendments could be made. However, with the parliament’s legal team, as well as Attorney General Ibrahim Riffath, clarifying that the same conditions did not apply to the present situation, the query was resolved by April 8.

Nasheed also expressed further concern that the initial bill contradicted the conditions under which constitutional amendments may be presented. With opinions remaining divided on the issue, particularly within the ruling party, the parliament then passed a motion to seek legal counsel from the Supreme Court on May 27.

On May 30, the Supreme Court advised the parliament to amend the constitution by including a transitionary provision. The top court also clarified that the ongoing ’State of Public Health Emergency’ was not subject to the same restrictions as a ‘State of Emergency’ declared by the incumbent President of Maldives.

The parliament also approved the bill lobbied by Henveiru West MP Hassan Latheef to decentralise administrative constituencies, with a majority of 73 votes in favour.