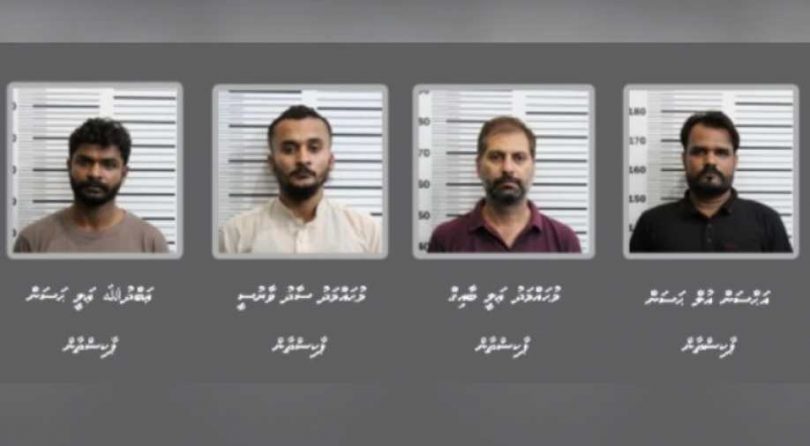 Pakistan’s link to a major drug haul has emerged in the Maldives, with the arrest of four Pakistani nationals aged between 20 to 45.

The incident happened earlier this month as Maldives Police Service confiscated around 80 kg of drugs in Addu and in all arresting 14 individuals involved in the cartel. The drugs included MDMA, amphetamines, heroin and were being smuggled with cooperation with international traffickers.

It is learnt that the four Pakistanis were arrested in September by Maldives police and this led to the police action in early October that led to the busting the drug syndicate. The arrested Pakistanis are Ahsan-ul Hassan (30), Mohamed Ali Baiq (41), Mohamed Saad Warsi (22) and Abdulla Ali Hassan (34).

It is also understood that no intelligence sharing occurred between the Pakistani forces and Maldives Police on the issue but what is interesting is Pakistani media via sources claimed that the country’s Anti Narcotics Force played a key role in helping. This was dismissed in the tweet by Maldives Police commissioner who mentioned “locally developed intelligence” playing a key role.

Commissioner of Maldives police service, Mohamed Hameed, in a tweet said,”The operation was carried out solely on locally developed intelligence and policing work. We will be engaging with our international partners as the investigation progresses.”

The Pakistani media even had images and videos, which were shared by Maldives Police on an international server during the operation. It looked like, Pakistan hurried to claim credit for the operation, something that was never officially communicated with the Maldives in the first place.

While Pakistan has no Navy to Navy cooperation with the Maldives as such, its envoys have been people with Naval background. Pakistan has been exclusively appointing Vice Admirals of Pakistan Navy as their High Commissioners to the Maldives.

The present High Commissioner Ather Mukhtar is a Vice-Admiral of Pakistan Navy who has specialised in Intelligence and building Bases for the Pakistan Navy. Prior to coming to the Maldives, Ather Mukhtar was Deputy Chief of Naval Staff (Projects) and has also served as COMNOR, during which he was providing intelligence to Pakistan Army deployed in the Northern areas. Incidentally, the Northern areas of Pakistan are the hotbed of drug-trade of the Golden Crescent.

In the past, especially during the era of former Maldives President Yameen, Pakistan tried to increase cooperation with the Maldives in terms of Defense and security. Pakistan Army Chief Bajwa and Pakistan Navy Chief Abbasi had visited the country in 2018. It was the time when Yameen imposed emergency was just removed from the country, raising eyebrows domestically and internationally.

In 2017, the then Pakistani Prime Minister Nawaz Sharif had visited the country and $5 million were promised to Maldives health ministry of a Medical School at Dharmuvantha hospital, but that never materialised.