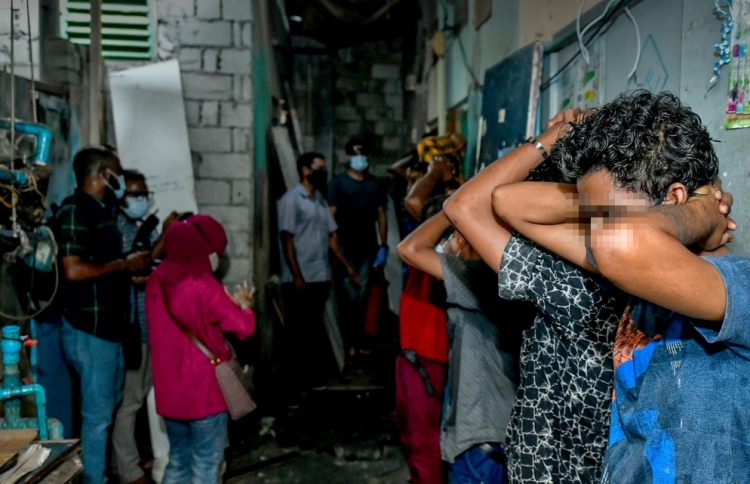 Maldives Police has reported an increase in the number of foreign nationals involved in the consumption and trade of illegal narcotics and alcohol.

Maldives Immigration Authorities have confirmed that work to deport those arrested is presently underway.

According to an Immigration spokesperson, of the expatriates arrested, only three were in possession of their passports. Hence, authorities are said to be procuring the necessary travel documentation for those remaining.

Nevertheless, the media official did not reveal information on the present location or status of the detainees.

In an interview given last Thursday to local media outlet Mihaaru by Police Superintendent Ahmed Shikaar, head of the Drug Enforcement Department (DED), he noted that the amount of foreigners being recruited by gangs and drug networks to partake in their illicit trade, particularly on the frontlines, is presently on the rise.

Superintendent Shikaar further projected that the trend would also see more foreign workers being inducted into the market and/or introduced to drug abuse for the first time.

“From communicating [with buyers] to other aspects of the drug and alcohol sale and trafficking, there is no small involvement of foreign nationals”, said Shikaar.

Noting that having foreigners working on the frontline offers added protection to the kingpins in charge of operations, the superintendent called the employing of expatriates to work in illegal activities a type of distraction.

Whilst DED Head Shaakir has made these assertions, it is also widely known that foreign nationals, especially expatriate labour workers, are often mistreated by their employees in the Maldives, and maybe under duress or facing impossible situations, prior to their involvement in any criminal activity.

A 30-year-old foreign national who has been residing in the country for 7 years, was arrested during one of DED’s recent sting operations. Speaking to Mihaaru News the person claimed that their drug use was a recent development and that narcotics were first offered by a friend approximately 7 months earlier.

Violations reported include that of including human trafficking, withholding of wages, poor living conditions, and other human rights violations.