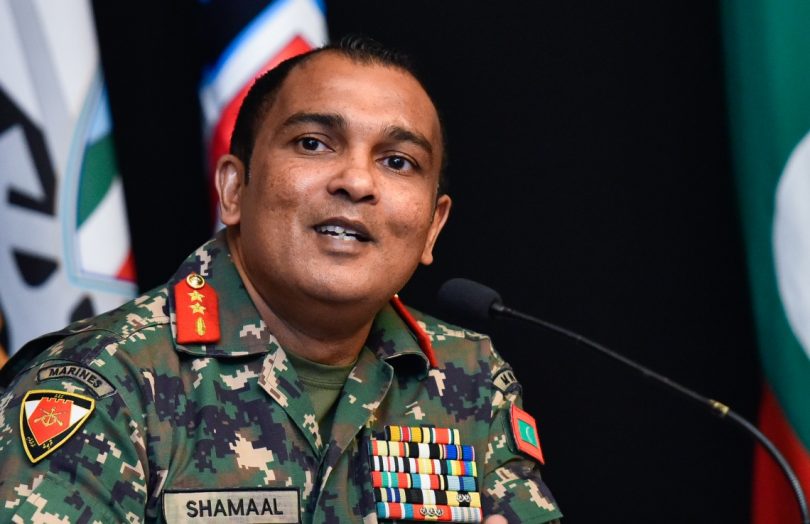 Chief of Maldives National Defence Force, Major General Abdulla Shamaal confirmed on Tuesday that to date, more than 40 officers were among those infected with COVID-19.

The figure amounts to over 13 per cent of the total number of Maldivians that tested positive for COVID-19 amid the ongoing global pandemic.

In an interview given to local media, Major General Shamaal said that MNDF recorded the largest population of infected, belonging to one entity.

Noting that MNDF officers were aware of the risk posed to them as they work on the frontlines to contain the local outbreak, he stated that it was likely that more officers may potentially be infected in the days ahead.

“Nevertheless, a lot of measures are in place to ensure the safety of officers as well as the protection of [the] force,” said the MNDF Chief.

“That covers everything from the beginning, starting from the most basic steps to foster awareness among officers, the isolating of officers, quarantine protocols – all of these concerns have been raised, discussed, and are [now] being implemented”.

The Maldives presently records 904 positive cases of COVID-19, of which 305 are Maldivians. The very first local to be found positive was also an MNDF officer, who has now recovered and returned to active duty.

We are honored to welcome back our fellow soldier WO1 Muammar Mohamed, the first Maldivian who tested positive for COVID-19.

He has recovered & promptly joined the forces to serve the nation. We applaud his dedication.

Insha Allah, there is hope that we can all make it through. pic.twitter.com/sjwfq6iK2W

The infection was detected while he was in quarantine after returning to the country following a training program that took place in the United Kingdom.

According to Major General Shamaal, despite the vigilance of army officers in following protection protocols, “exposure to risk” cannot be completely negated.

Referring to the projected surge of the virus in the Maldives, the Defence Chief added that MNDF officers were prepared and committed to working alongside other front-liners in various capacities.

“Officers are standing ready in arms to serve their nation, the Maldivian people, in any way necessary and restore normalcy for all”.

Major General Shamaal revealed that an action plan to deal with a surge was formulated with participation from specialised officers. He added that additional personnel would be mobilised during its implementation.

“We provide officers with training on how best to proceed in these matters, well in advance. For instance, we had already briefed the team on how to deal with the death of a patient infected with COVID-19. Female officers were especially involved in training for these aspects” said the Major General.

Yesterday we had so many positive cases @MNDF_Official but last night our TROOPS were there to bury our 1st #COVID related death. MEN WOMEN alike in uniform they stand, BRAVELY doing what the NATION asks of them. Today with tears of SORROW but with PRIDE, we SALUTE YOU🙏 pic.twitter.com/5CoUUkBP1d

Recognising that most officers had not returned home for over a month, with officers placed at quarantine facilities exceeding 2 months in duration, the Defence Chief praised the military for their efforts on the frontlines, on behalf of President Ibrahim Mohamed Solih.

“I’d also like to highlight the sacrifices being made by the families of our officers, and extend my thanks to all of them at this time”, said Major General Shamaal.

MNDF has been collaborating with nearly every aspect of Maldives’ response to the COVID-19 pandemic, in particular following the first detection of community spread within capital city Male’, as well as after it was noted to have spread across to different atolls.   Officers are stationed at every quarantine facility and are working alongside the National Emergency Operations Centre to ensure that the necessary operations are ongoing, and enforcement remains in place.

Southern Area Command of @MNDF_Official is helping Addu City residents protect their homes by placing sand bags so as to prevent homes from flooding in the rough, bad weather & rain Addu City is experiencing presently 🙏 pic.twitter.com/LuhTyJMULA

Of the 904 people that were found to be infected by the novel coronavirus in the Maldives, presently 869 remain active while 32 have recovered. The country has recorded 3 deaths.

On March 12, 2020, the World Health Organization classified the spread of COVID-19 as a global pandemic. The new strain of novel coronavirus has infected over 4.36 million people and claimed over 293,000 lives around the world. However, out of those infected, 1.61 million people have recovered.