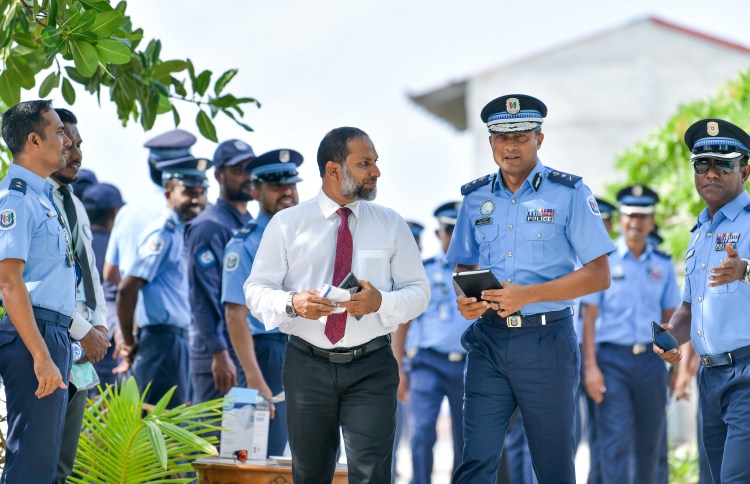 Commissioner of Police Mohamed Hameed, speaking on Sunday to commemorate Maldives Police Services’ 87th anniversary, said that the institution’s purpose is to establish itself as an approachable and dependable force.

Unlike previous years, our flag hoisting ceremony last night at 00:00hrs took place with only the flag detail and no audience. Our #87thPoliceDay celebrations have been postponed till this #COVID19 crisis is over.#WashYourHands#StayAtHomeAndStaySafe#COVID19Maldives pic.twitter.com/EH9bs6C0ku

During his address, Commissioner Hameed highlighted the importance of public trust to successful policing, adding that confidence in the institution would help shape communities into safer environments. Similarly, he shed light on the vitality of public involvement in shaping the role of police in society.

“In order to achieve these targets, police will undertake certain tasks in accordance with the Strategic Plan implemented last year. To implement the Strategic Plan in its entirety, a total of 73 projects were catalogued”, said the Commissioner, adding that out of the total, 15 were prioritized for this year.

In marking 87 years of policing, the Commissioner noted the establishment of Neighbourhood Support Officers in the Greater Male’ Region, Addu City And Fuvahmulah City in 2018.

According to the CP, expansion of police operations to six additional atolls will be put into motion after the global COVID-19 pandemic situation subsides.

Maldives first police force was established by Law on 29 March 1933, 1933, during the kingdom of Sultan Muhammad Shamsuddeen III. The operating procedures of service set during the sultanate remained until the election of former President Maumoon Abdul Gayoom on 11 November 1978. Re-structured under Ministry of Defense and National Security on 10 January 1979, National Guards were renamed as National Security Service (NSS).

On the cusp of the new millennia in 1999, Police shifted to Shaheedh Hussain Adam Building. Then, after a major infrastructural shift, on 1 September 2004 Maldives Police Service was shifted to the jurisdiction of the Ministry of Home Affairs, with NSS being renamed MNDF and shifted under Ministry of Defence.