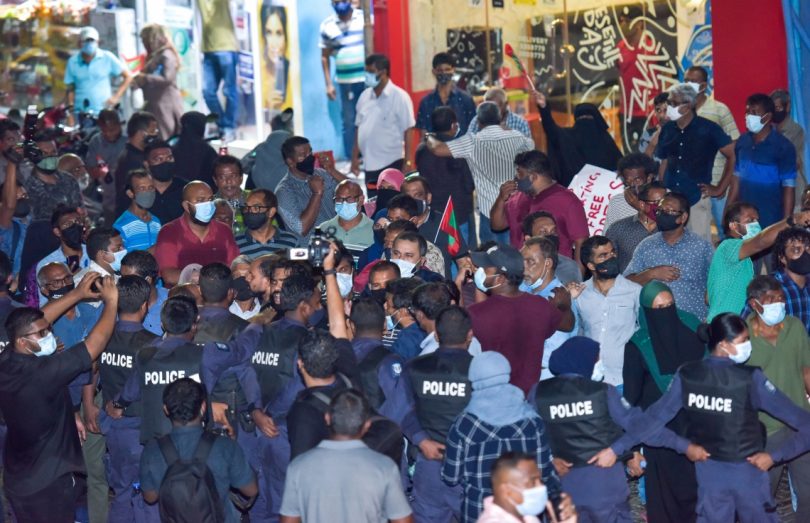 The opposition coalition of Progressive Party of Maldives (PPM) and People’s National Congress (PNC) is gearing up to hold protests on all inhabited islands outside of the Greater Male’ region.

Accusing the government of trading the country’s assets for loans in the name of development, the opposition stated that the protests scheduled for Friday evening are “against selling off the Maldives”.

The former parliamentary representative of Gaafu Dhaalu Atoll’s Madaveli constituency Mohamed Muaz said that the people should raise their voices against the state “selling off the oceans”, fishermen not receiving suitable payment, and the lack of the government’s assistance for local employees that were terminated and sent home on no-pay leaves amid the COVID-19 pandemic.

Claiming that the state’s fraudulence had increased instead, Muaz accused the government of “washing away public funds after ordering the people to wash their hands and stay home”.

PPM’s Vice President and parliamentary representative of Lhaviyani Atoll’s Naifaru constituency Ahmed Shiyam noted that the incumbent administration, prior to coming into power, was loudest in claiming that former President Abdulla Yameen Abdul Gayoom had sold off 12 inhabited islands to China.

Asserting that Yameen will never sell off the country in exchange for development loans, Shiyam said that “we are now seeing the state’s actions of taking hefty loans from neighbouring countries and financial institutions reach the point of costing the country’s freedom”.

“Therefore, every Maldivian should question whether this country is ensuring the rightful amount we deserve”.

Stating that many members of ruling Maldivian Democratic Party (MDP) also want positive change, Muaz requested them to “consider this as a national issue and participate in this [protest] as well”.

The alliance of PPM and PNC held a series of protests in late July, calling for the release of convicted former President Abdulla Yameen Abdul Gayoom and the resignation of incumbent President Ibrahim Mohamed Solih.

However, the opposition decided against proceeding with the protests due to the upsurge in the number of COVID-19 cases in the Maldives.

In addition to the Greater Male’ region, active virus cases are present in 22 inhabited islands throughout 11 atolls in the archipelago.