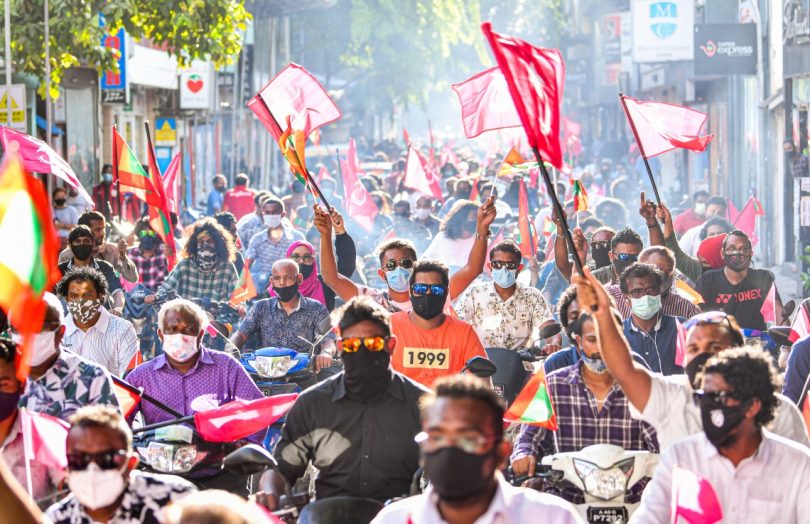 The opposition coalition of Progressive Party of Maldives (PPM) and People’s National Congress (PNC) hosted demonstrations in different parts of Maldives on Friday, in violation of the Health Protection Agency (HPA)’s safety guidelines.

The protest staged in capital Male’, the COVID-19 hotspot in the country, is being investigated by Maldives Police Service for participants’ failure to exercise social distancing measures and wear face masks.

Despite the opposition alliance formerly affirming that protests will not be held in the Greater Male’ Region, a large number of participants joined the motorcycle rally that took place on the capital’s streets.

Although a gathering of more than five individuals is currently prohibited under the precautionary measures announced to control the community spread of COVID-19, the police did not attempt to disrupt the aforementioned rally.

Many individuals, including prominent members of the opposition parties, did not reportedly wear face masks during the protest.

Opposition protesters took to the streets, voicing concerns over the incumbent administration “selling off the Maldives” and calling for the released of former President Abdulla Yameen Abdul Gayoom, currently serving a five-year jail sentence on money laundering charges.

Claiming that Yameen was the “solution” for the country’s issues, participants of the demonstration also called for President Ibrahim Mohamed Solih’s resignation.

As the COVID-19 risk level for the island nation is currently at an alarming alert level nine, authorities are constantly requesting the public to adhere to safety guidelines and prevent further spread of the virus.

Speaking at the press briefing held by the Health Emergency Operations Centre (HEOC) last Monday, Chief Superintendent of Police Abdulla Shareef asserted that holding protests and demonstrations are prohibited under the current circumstances, adding that police personnel need to be quarantined and isolated due to attending such matters.

Previously, the Elections Commission (EC) had also requested all political movements to hold their events in line with HPA’s guidelines.

The opposition alliance also held a rally at sea last Tuesday, near Maafushi in Kaafu Atoll, calling for the release of the ex-president.

The alliance of PPM and PNC held a series of protests in late July with the same demands. However, the opposition had decided against proceeding with the protests later at the time, due to the upsurge in the number of COVID-19 cases in Maldives.

Confirmed COVID-19 cases skyrocketed after the state initiated efforts to steer the country towards a ‘new normal’ with the phased easing of lockdown restrictions across the Greater Male’ Region. As one of the most densely populated cities in the world, Maldives’ capital Malé continues to record a significant number of COVID-19 cases, similar to the first weeks following the first confirmed local transmission on April 15.

In addition to the Greater Male’ region, active virus cases are present in 32 inhabited islands and 15 resorts across the archipelago.