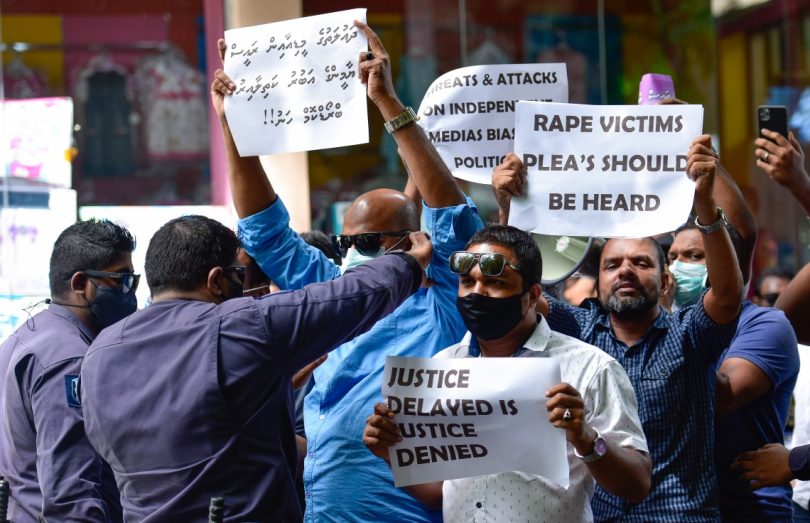 Progressive Congress Coalition, which consists of Progressive Party of Maldives (PPM) and People’s National Congress (PNC), accused the government of discrimination among various media organisations, during the protest held on Monday, in front of Maldives’ Broadcasting Commission (Broadcom).

Approximately 30 protestors demonstrated peacefully, calling for the resignation of Broadcom President Mariyam Waheedha and to establish equal treatment for all media.

Recently, the parliamentary ‘Committee on Independent Institutions’ ordered the broadcasting commission, along with Maldives Media Council, to audit the coverage of all media, over the sexual assault of a Kenyan woman that took place on a docked safari.

Speaking to local news Mihaaru, PNC Vice President Ibrahim Shujau referred to Broadcom’s probe into opposition-aligned Channel 13’s reporting of the incident, alleging that, while the media watchdog had taken action against the media outlet, it had “refrained” from penalising Public Service Media (PSM).

“We call on the government to autonomize the nation’s media”, said PNC’s second-in-command. “Broadcom is attempting to halt Channel 13’s efforts to advocate for social justice”.

In addition to the opposition’s most often reiterated demand, “Free President Yameen”, protestors were also seen holding posters that alluded to a wide variety of issues, including “Rape Victim Pleas Should Be Heard”, “Stop Selective Justice” and “Justice Delayed is Justice Denied”.

The latter ‘demands’ are widely associated with the series of workplace sexual harassment claims directed at political appointees and persons in leadership, that have recently surfaced.   However, in previous years, PPM members have been strongly criticised for spouting “sexist” rhetoric, including ex-President Yameen’s infamous request that women not be offended but “it is men who take initiative and get things done”.

Little over an hour into the protest, the police dismantled the gathering, declaring the coalition members were disrupting road traffic.   The protestors headed north down Majeedhee Magu, assembling briefly at Artificial Beach and then returning to the PPM/PNC head office located nearby.

This guy used to be my MP. He blocked me after I demanded that he stop violating the right to free speech and free media.

After getting voted out of parliament, he is now protesting to free the media. https://t.co/1AJgJnW2Gw

Although PNC and PPM have protested for media freedom in the Maldives, the time period during which the most number of penalties for journalism were reported, and a significant amount of violence was incurred by local reporters including to as-yet unsolved cold cases, was during the tenure of former President Yameen.

Yameen, who ratified the contentious defamation bill that delivered the biggest blow to media and free speech across the Maldives in recent history, is the founder and former president of PNC.

Coming in a close second is Yameen’s estranged half-brother, former President Maumoon Abdul Gayoom, during which strict media censorship took place, including one that led to the imprisonment of then-journalist Mohamed Nasheed, who would later become president of Maldives as well.

Maumoon is the president of Progressive Party of Maldives (PPM), the party from which PNC originally spun-off.