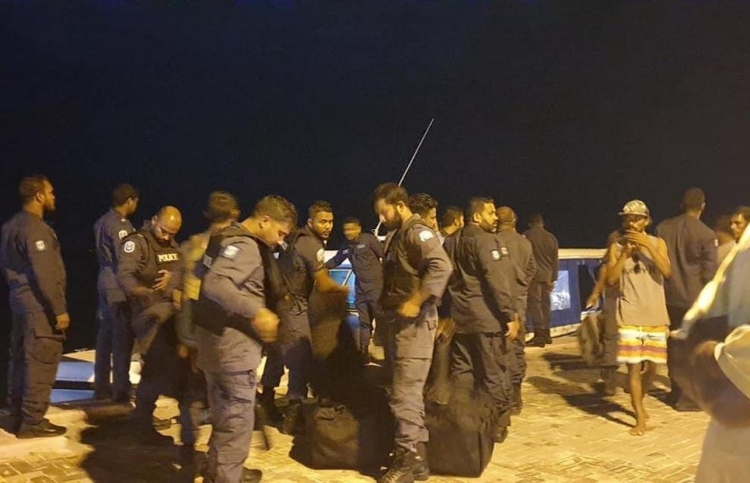 Maldives Police Service on late Thursday revealed that an officer was injured as police attempted to make landfall on a developing resort in Baa Atoll, following reports of expatriate workers barring local staff from departing the island, protesting over unpaid wages.

According to authorities, the police officer suffered an injury to the head and is currently undergoing treatment at the Baa Atoll Regional Hospital.

MTUC is deeply concerned over events unfolding due to exploitation of “undocumented migrant workers” and delaying payment of wages for months in B.Bodufinolhu
We call for social dialogue, between relevant parties to resolve the dispute to prevent aggravation of situation

As revealed by police, the situation unfolded when 15 Maldivians were kept hostage by roughly 200 expatriate workers after employers failed to pay six months of unpaid salary.

Departing from capital city Male’, police have mobilized a ‘Public Order Response Team’ from its ‘Specialist Operations’ unit and are en route to the island in order to deescalate the situation.

A resident of Thulhaadhoo, Baa Atoll, an island adjacent to the resort, confirmed that expatriates successfully prevented police from reaching the island by throwing stones and construction material from the harbour, in addition to arming themselves with tube lights.

With regards to the Maldivians stranded on the island, a Thulhaadhoo local said that some individuals were “residents of Thulhaadhoo. They were intending to return to the island but was barred from doing so. However, one individual swam back to the island tonight. He was shaking out of fear. [He] did not even talk”.

The construction of the resort was contracted to a company allegedly owned by the parliamentary representative for Shaviyani Atoll’s Milandhoo constituency, MP Ali Riza.