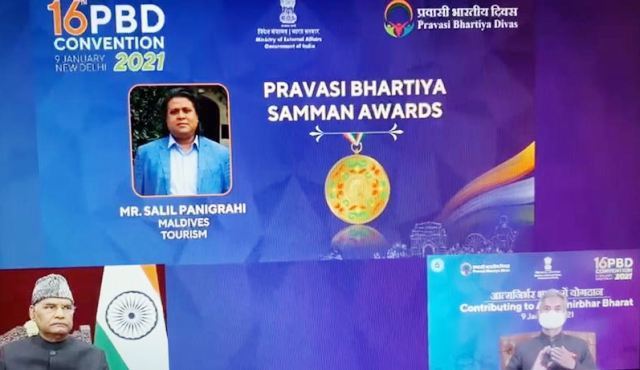 Bhubaneswar: Odisha-born and Maldives-based hotelier Salil Panigrahi, resident of Male in the Maldives since last 20 years and Founder & Managing Director of Atmosphere Hotels & Resorts has been awarded the prestigious Pravasi Bharatiya Samman 2021 by the President of India in the Tourism category for his contribution to the tourism industry and strengthening relationship between India and Maldives through his Indian Oceanic Hospitality Brand. He’s among the 30 NRI individuals and organisations selected for this year’s Pravasi Bharatiya Samman. The award recognises his stellar contribution to the tourism sector through the development of acclaimed resorts in #Maldives which has enhanced India’s prestige.

A Chartered Accountant from Bhubaneswar, Salil started his career about 25 years back at Oberoi Hotels & Resorts in the finance department.

After his stint at Oberoi, Salil worked at Six Senses Group, founded by Indian-British hotelier Sonu Shivdasani. In early 2003, Salil partnered with investors from the Maldives to form EoN Resorts, a company that engaged in resort development and consultancy for luxury resorts in the Indian Ocean holiday destination. In 2012, Salil wanted to embark on his next phase and launched with his Maldivian partners a brand called Atmosphere, to partially own but primarily take on management contracts of resorts within the Indian Ocean.

Atmosphere Hotels & Resorts offers guest-centric resort experiences through unique resort plans, offering guests a range of all-encompassing experiences, with varieties of dining options as well as a number of complimentary amenities and activities that ensure a relaxed, hassle-free holiday experience at each resort, all the while staying true to the brand’s core philosophy: ‘The Joy of Giving’.

OZEN Maadhoo, the first resort under the brand, opened in July 2016. OZEN’s success story continues in the Maldives with the addition of OZEN Reserve Bolifushi, which opened in December.

OZEN Life Tangalle takes the brand to the south coast of Sri Lanka and is scheduled to be launched in 2023.