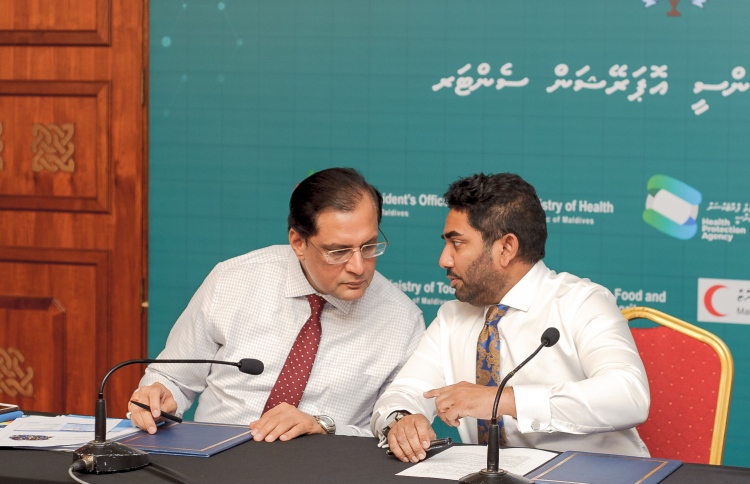 Auditor General Hassan Ziyath, on Saturday, told the Parliamentary Committee on Public Accounts that there are no official documents from the World Health Organisation (WHO) to back up Health Minister Abdulla Ameen’s claims that the shady ventilator deal was supported by WHO.

Ameen had maintained that the health ministry was procuring 75 ventilators from Dubai company Executors General Trading LLC under the recommendation of WHO.

However, according to Ziyath, discussions only took place between Ameen and the WHO representative to Maldives Dr Arvind Mathur, without any official involvement of WHO.

Ziyath further told the committee that the health ministry’s internal memos state that the ventilator supplier was selected following discussions with WHO.

“Looking at [health ministry’s] documents it seems to us too that WHO was heavily involved. Even the document submitted to Parliament says WHO in the Maldives and WHO in Dubai are involved”, Ziyath explained.

“But there are no official documents from WHO. That is why we are saying this should be further investigated”.

The auditor general further said that health ministry had informed the Ministry of Finance that the transaction had taken place, prior to official communication with any WHO offices.

In a letter addressed to the finance ministry on March 30, the health ministry had stated that the ministry had received a quotation, with WHO’s counsel, from a Dubai company suited to supply items to WHO under emergency preparedness.

Highlighting the aforementioned, Ziyath noted that an exchange between the health ministry and WHO only took place later, on March 31, in the form of a forwarded email that cannot be considered proper documentation.

“Health Ministry had not even formally requested WHO for help in procuring ventilators”.

Ziyath expressed concern that a supplier “was already selected” when the matter was forwarded to the bid committee, stating that this was a clear violation of the finance ministry’s approval to hold a bidding process in line with the Public Finance Act.

The auditor general highlighted the negligence of the bid committee in awarding the contract to a company that the state had previously not dealt with, especially without vetting them.

Noting that the ministry’s Financial Controller Ahmed Aslam had failed to do his duty, Ziyath posed the question: “on whose request was this process concluded so swiftly [within two days]?”

He also stated that deception was involved in procuring the items, noting inconsistencies between the ordered brands and received products.

Finance minister in the clear

Due to the powers granted to financial controllers under the Public Finance Act, Ziyath stated that the finance ministry does not review and approve every single payment.

However, admitting that Finance Minister Ameer’s responsibilities could be questioned due to the hefty funds involved in this case, Ziyath noted that Ameer could now approve a payout of any amount, as long as it is within the limits of the law, due to the unique circumstances of the ongoing pandemic.

However, Ziyath stated his belief that the pay-out process should be more reformed, and large amounts of money should be disbursed after careful consideration.

Supporting the state’s decision to suspend those suspected of involvement in the scandal, the auditor general stressed the importance of taking necessary measures and generating results to prevent future corruption and reform the system.

President Ibrahim Mohamed Solih has lodged the violations noted in the audit report at Maldives Police Service and the Anti Corruption Commission (ACC). The two institutions will conduct a joint investigation into the case.

Spokesperson Hood had on Sunday, assured that the government will not hesitate to take action against individuals responsible “regardless of those involved,” once the final compliance report is officially submitted.

Following the uproar over the ventilator controversy, Ameen recused himself from his ministerial duties until the conclusion of the investigations into the matter. The health ministry is currently being temporarily spearheaded by the Minister of National Planning, Housing and Infrastructure Mohamed Aslam.