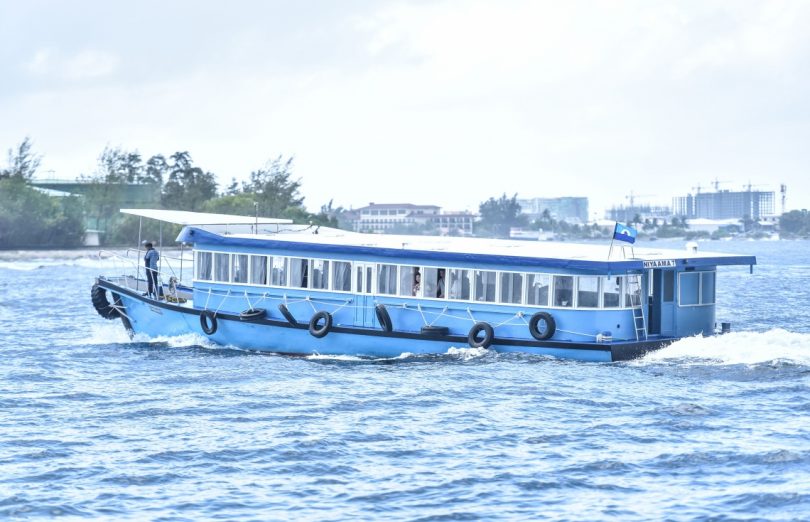 Maldives Transport and Contracting Company (MTCC), on Sunday, announced that it would increase the frequency of ferry services in the greater Male’ region, starting from June 15.

The announcement was made after the government revealed that citizens in the capital city of Male’ would not require permits to be outside between 0500 hrs and 2200 hrs from June 15 onwards.

MTCC revealed that passengers using their services would be required to wear facemasks during trips and that the seating arrangements at terminal waiting areas and transport vessels would be in accordance with social distancing measures.

Ferries to Vilimale’ will run every 15 minutes starting from 0545 hrs to 0100 hrs. However, the company noted that passengers without a valid permit will not be allowed to travel after 2200 hrs.

Premium ferries to Hulhumale’ are scheduled every 30 minutes between 0600 hrs and 2130 hrs.

MTCC disclosed that transport services outside the greater Male’ region will also resume on June 15.

Introduced on April 15 in response to the COVID-19 outbreak, lockdown measures in the capital city of Male’ considerably disrupted public transport in the region. Following several extensions, President Ibrahim Mohammed Solih announced phased out easing of lockdown restrictions starting May 28, with the second phase beginning on June 15.

As one of the most densely populated cities in the world, Maldives’ capital Malé recorded a significant increase in COVID-19 cases in the first weeks following the first confirmed local transmission on April 15. However, the number of recoveries recorded daily are now consistently higher than in newly confirmed cases.

The Maldives presently records a total of 2,035 confirmed cases of COVID-19, of which 714 are active cases. The country records 1,311 recoveries and eight deaths.

WHO has classified the spread of COVID-19 as a global pandemic. The new strain of novel coronavirus has infected over 7.9 million people and claimed over 435,400 lives around the world. However, out of those infected, 4.1 million people have recovered.