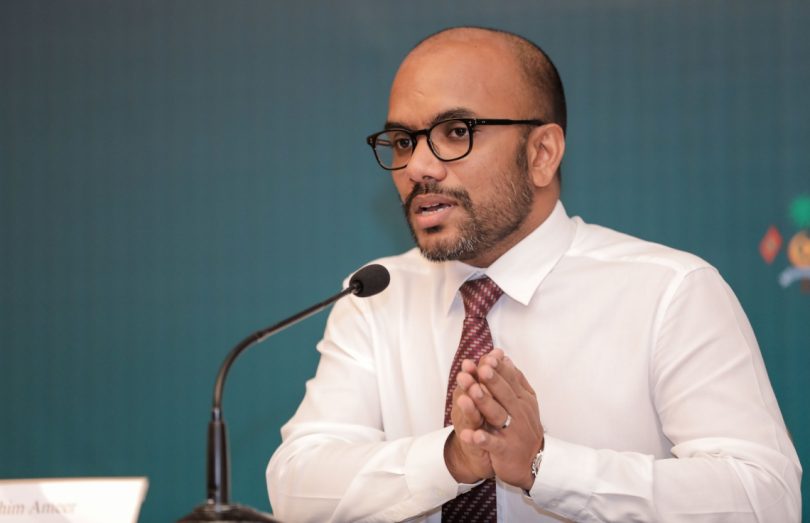 Speaking at a parliamentary session following the submission of an emergency motion over the matter, the Vice President of opposition Progressive Party of Maldives (PPM) called for both Minister of Health Abdulla Ameen and the finance minister’s resignation.

Although the compliance audit over the expenditure of the health ministry did not point towards Minister Ameer’s involvement , Shiyam claimed otherwise.

The audit report released by the Auditor General’s Office (AG) on Sunday, revealed that the health ministry had spent millions in violation of the Public Finance Act, whilst claiming to procure ventilators and other medical supplies, spending over MVR 30 million in state funds.

Referring to statements made ruling Maldives Democratic Party (MDP)’s Chairperson and lawmaker for the Henveiru West constituency by Hassan Latheef, in which he expressed concern over the approval of state funds by Minister Ameer, MP Shiyam dubbed Latheef’s words “a major declaration [in itself]”.

However, MP Hassan Latheef fired back against Shiyam’s implying of widespread collusion across the MDP administration’s leadership and brought up the Maldives National Defence Force compliance audit, which he said received an “A plus” from the Auditor General Hassan Ziyath.

Speaking at the Parliamentary Public Accounts Committee meeting held on Tuesday, the Auditor General stated that while each individual payment cannot be reviewed prior to approval by the finance ministry, concerns could be raised over Minister Ameer having authorized funds of such magnitude, without flagging issues.

Per the audit, the health ministry’s negotiations with the Dubai company were rife with corruption, including claims that the order was placed following a recommendation by the World Health Organisation (WHO).

The audit report also noted that agreements with local companies Naadu Pvt Ltd and MedTech Maldives were formulated in a manner damaging to the state and seemingly, deliberately steered towards enriching certain entities.

Furthermore, while all three companies failed to procure the equipment before the specified deadline, 10 ventilators provided by Executors did not meet standards stipulated in the agreements and subsequently could not be used to treat COVID-19 patients.

Following the public uproar over the corruption allegations revealed by the Auditor General’s Office, Minister Ameen also recused himself from all duties until the conclusion of the investigation.

Full details are available at the link below:1