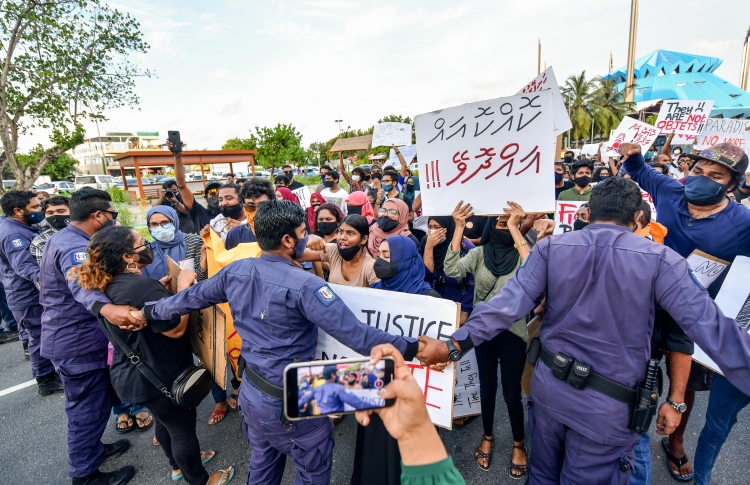 The Chair of the Parliamentary Committee on National Security and Foreign Relations, Ibrahim Shareef (Mavota) revealed on Thursday that no progress was made on the motion to repeal Section 24 (f) of the Peaceful Assembly Act 2013 because the motion was revoked after submission.

The amendment to the Peaceful Assembly Act during former President Abdulla Yameen Abdul Gayoom’s administration granted powers for the state to impose limitations on assemblies.

Under this amendment, in a controversial move that has drawn much ire and scrutiny, the Ministry of Home Affairs declared on Tuesday that protests and all forms of public gatherings cannot be held without “prior written approval by Maldives Police Service”.

Despite the government’s present stance on this issue, the ruling Maldivian Democratic Party (MDP) which was the main opposition during Yameen’s administration, had lambasted the amendment when it was first implemented, stating it was unconstitutional and in violation of the fundamental right to assembly.

Speaking at a meeting held by the Parliamentary Committee on National Security and Foreign Relations, Home Minister Imran Abdulla had stated on November 27, last year, that abolishing the amendment may disrupt the system.

Dhivehi Rayyithunge Party (DRP) member and the parliamentary representative for Kaafu Atoll’s Kaashidhoo constituency, MP Abdulla Jabir had filed the motion to repeal Section 24 (f) of the Act in August 2019.

During a meeting held by the Parliamentary Committee on National Security and Foreign Relations on Thursday, an independent representative of Greater Male’ area’s Vilimale’ constituency, MP Ahmed Usham questioned the committee’s lack of progress on MP Jabir’s motion.

Committee chair and ruling party representative of Addu Atoll’s Maradhoo constituency, MP Ibrahim Shareef (Mavota) answered that Jabir had informed him that he was revoking the bill.

However, Shareef added that the Jabir never officially informed the Parliament Secretariat of revoking the bill, and therefore, the bill was still present at the committee.

Shareef also noted that relevant authorities of the current administration had advised that passing MP Jabir’s motion as it is, and granting the right to stage protests anywhere, is “not a good decision”, as it could threaten societal peace and harmony.

MP Usham shot back that the freedom of assembly was limited due to a decision of the government rather than a legal issue. However, he requested the committee to make a decision on MP Jabir’s bill, instead of “leaving it parked” at the committee.

“It is going to be one year [since the bill was filed]. That is not right. It is a responsibility of all committee members to ensure that the committee’s work is completed”, he added.

Usham’s request was supported by other members present at the committee meeting as well.

Shareef stated that he will confirm whether Jabir officially informed the Parliament’s Secretariat that the bill was revoked.

The administration’s order to acquire written approval from police prior to an assembly came after multiple protests were staged during the month of July, including marches by exploited expatriate workers demanding unpaid wages, child and women rights groups, as well as by the opposition coalition.

The Bar Council, on Thursday, called on the government to reverse the restrictions, declaring that the administrative order was in contravention of the Constitution and international obligations of Maldives.

In addition to the Bar Council, rights groups, activists, parliamentarians and other local entities, the international NGO Human Rights Watch has also slammed the government’s decision as a violation of fundamental rights.