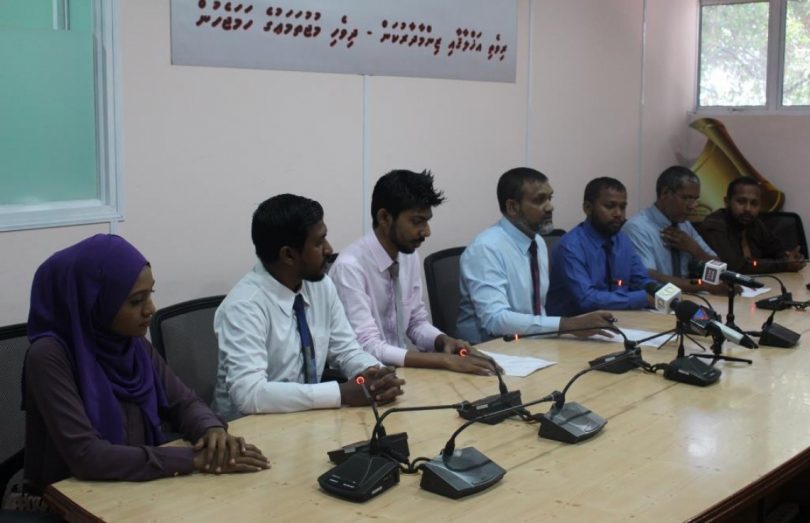 Maldives Media Council (MMC) noted on Sunday that there was significant “spirit and intent” among its members, towards facilitating a proper accreditation mechanism for journalists working in the country.

Translation: (2/3) In the interest of upholding the integrity of responsible journalism, this council declares its spirit to formulate a mechanism to accredit journalists and intent to facilitate at the earliest juncture. (3/3) Further, we will be demanding a formal apology from Ras Online’s editor as well as the reporter. IMAGE: TWITTER

The media watchdog made the statement following a query posed by a male reporter representing a website called ‘Ras Online’, during the daily press conference held virtually by National Emergency Operations Centre (NEOC) to disseminate information regarding the global COVID-19 pandemic and its outbreak in the Maldives.

The question presented included phrasing that, despite being the original local ‘Dhivehi’ language term used for decades to refer to Bangladeshi nationals, in consideration of the widespread ill-treatment of labour workers from the country, is now considered by most Maldivians to be derogatory to the former.

At the mention of the phrase, the reporter was interrupted by HPA’s Senior Medical Officer Dr Nazla Rafeeq, who requested the reporter be mindful that all parties involved are human and asked him to, therefore, speak respectfully. Responding to the question, she pointed out that the first positive case of a Bangladeshi national in Male’ was a person that married into a Maldivian family. Adding that virus patterns do not discriminate by race, at the end of the conference, she praised the many expatriate workers working with the authorities on the frontline, aiding national efforts.

Noting the rise in stigma for expatriate workers at this time, she urged the public not to discriminate and abandon any behaviour that may be construed as derogatory.

Translation: (1/3) This council does not deem the actions of the person presenting questions on behalf of Ras Online, that was demonstrated at the press conference held tonight by the National Emergency Operations Centre, to be of a responsible nature. IMAGE: TWITTER

In a tweet made via the council’s official handle, the watchdog said it did not consider the reporter’s actions to be “responsible” and called for an apology from the editor of the publication.

The incident sparked public outrage, with many praising Dr Nazla’s handling of the matter, although there were also several remarks on local journalistic practices. 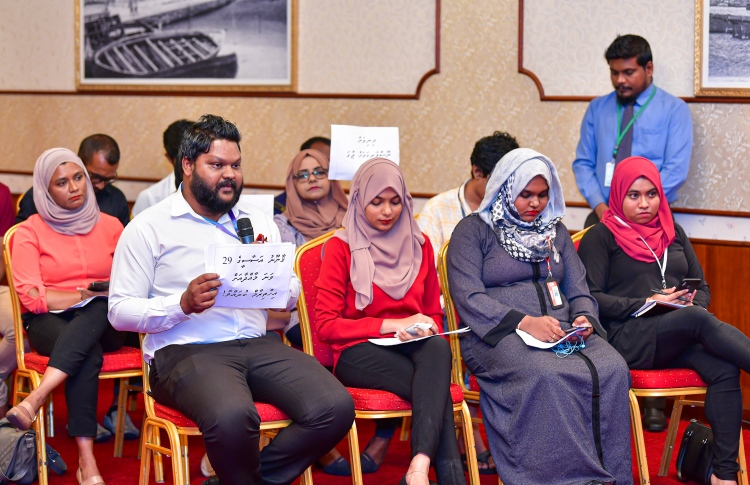 Journalists in attendance at Dharubaaruge at the daily press conference held by the National Emergency Operations Centre in Dharubaaruge. The photograph is taken prior to the lockdown in Male’ city declared on April 15, after which the conference has been held virtually. PHOTO: AHMED AWSHAN ILYAS / MIHAARU

Initially, Ras Online responded to the shared fury directed at the reporter and website on social media with an editorial justifying the use of the derogatory term using etymology, and accusing other media representatives of finding fault over previous career choices of the particular reporter. It further accused Dr Nazla of cutting the journalist short and delivering “an irrelevant answer” as part of an “emotional outburst”.

However, the outlet made a complete turnaround and published a formal apology Monday evening, noting that it had received a letter of warning for “violating the journalist code of ethics” from the Media Council, earlier in the day.

On Monday, Commissioner of Police Mohamed Hameed stated that Maldives Police Service (MSP) would take criminal action against individuals spreading false information about COVID-19 which, in his words, “serves no legitimate purpose, but create fear and panic among the public”.

Meanwhile, NEOC itself has also cautioned against misinformation urging both the public and media to refrain from making false speculations, discriminatory and spreading them on social media.

Maldives Media Council is a 15-member body elected by Maldivian media to preserve, promote and maintain the freedom of the press, within the legal framework.

Despite swift responses to penalise media for stories that may be received negatively by the administration in power at the time, the media council of Maldives is yet to act on issues such as actively discrediting journalists that work in violation to internationally recognized journalistic ethics or highlighting best practices put in place.

Although voices from the press, as well as the public, have repeatedly been raised in favour, the council is also yet to recognize the contribution to media by local English-writing journalists, investigative news reports, regional news outlets and the industry’s ever-relevant website and app developers.

French-based ‘Reporters Without Borders’ (RSF) placed the Maldives on the 98th position of its 2019 ‘World Press Freedom Index’, an elevation of 22 ranks, as compared to the 2018 rank of 120.

Maldives’ first confirmed case of COVID-19 from the capital city of Male’, was recorded on April 15, involving a local woman who presented to the flu clinic in Malé after developing coronavirus-like symptoms. At present, the country has not identified an index patient for the outbreak.

As of now, Maldives records 67 confirmed and 51 active cases of COVID-19, with a total of 16 recoveries. The latest development places the number of cases in Male’ City, one of the most densely populated areas in the world, at 47. Of these, 23 are expatriates.

The World Health Organization (WHO) has classified the spread of COVID-19 as a global pandemic. The novel coronavirus has infected over 2.4 million people and claimed over 166,041 lives around the world. However, out of those infected, more than 635,875 people have recovered.