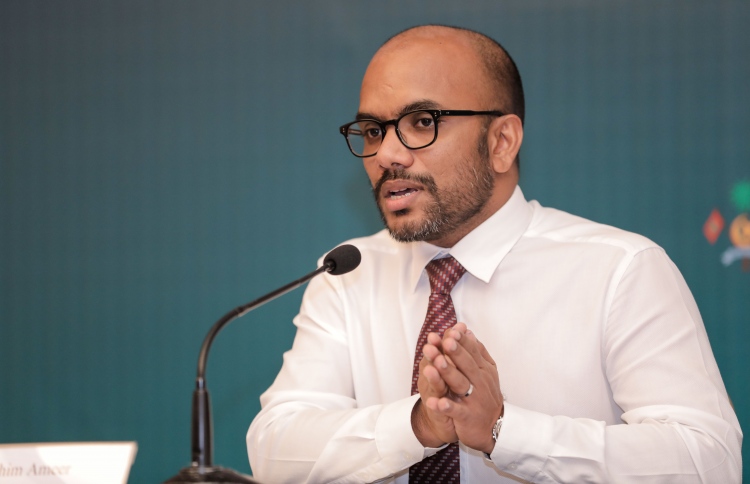 Minister of Finance Ibrahim Ameer stated on Tuesday that minimum wage should be set after the country recovers from the economic recession caused by the ongoing COVID-19 pandemic.

Speaking at the Parliament’s Economic Affairs Committee, Minister Ameer stated that it is not advisable to determine a minimum wage until the situation is restored to what it was in January this year, adding that the economy is estimated to make a turnaround by 2022.

The minister added that setting a minimum wage amidst the current economic context will overburden the state budget and expenditure on salaries.

Responding to a question posed by the Parliament Representative for Fuvahmulah North Constituency MP Mohamed Rasheed regarding the implications of a minimum wage on the state budget, Minister Ameer said that the state expenditure on civil servants’ salaries would increase by at least MVR 3.7 billion.

He added that the budget will be further strained by the increase in spending on salaries for state-run companies, but noted that the final value is yet to be determined as the government does not have to pump funds to some of these companies.

“However, with our current situation, there will be challenges in managing the cash flow for most companies”, he added.

Taking Maldives Airports Company Ltd (MACL) as an example, Ameer admitted it was now difficult to manage cash flow for the company, although, under normal circumstances, MACL generates the highest profit in the country.

Considering the SMEs and ex-pats

The Finance Minister also noted that it would be extremely difficult for Small and Medium Enterprises (SMEs) to pay their employees the minimum wage as proposed in the amendment to the Employment Act.

Ameer further cautioned that a minimum wage applicable to foreigners will strain the national reserves.

“Salaries given to foreigners will flow out of the country as a remittance. We will lose an additional USD 270 million in that regard. Under the current circumstance, we cannot afford USD 270 million from our usable reserve”.

In response, Parliament Representative for Maafannu Central Constituency MP Ibrahim Rasheed (Bondey) expressed concern that a minimum wage was especially required at the current time since many employees are working under high-risk conditions. He went on to raise further concerns over several resorts slashing their employees’ pay.

“Waiters are working with their lives in their hands. While they are subject to working under such high-risk conditions, some resorts are paying them a wage of only MVR 1,000. This is atrocious. So, now is the time to set the minimum wage”, the lawmaker said.

Amendments to the Employment Act proposes a minimum wage between MVR 4,000 and MVR 8,500 for three different categories.