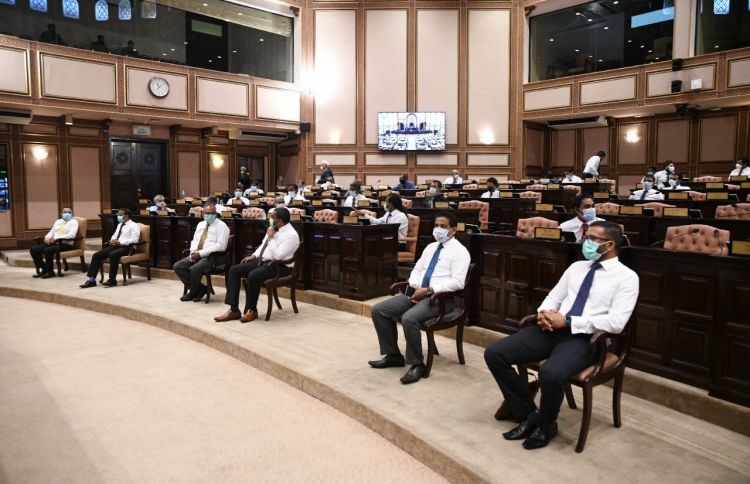 The parliamentary group of ruling Maldivian Democratic Party (MDP) issued a three-line whip late Tuesday to approve the state-lobbied amendment to extend the terms of incumbent local council members until elections can be held.

Of the 55 members present at the MDP parliamentary group meeting, 42 MPs voted in favour of endorsing the bill, while nine voted against and four abstained.

The MDP lawmakers made the decision following a heated debate earlier on the parliament floor, during the first parliamentary session hosted following the implementation of lockdown measures in the capital city of Male’, when the MPs offered differing opinions on the bill.

The amendment to the constitution to extend the three-year tenure of councillors was proposed by Bilehdhoo MP Ahmed Haleem.

However, another MDP representative, Henveiru Hulhangu MP Hassan Latheef submitted a sunset bill proposing measures to enact in the interim period until local council elections postponed over the ongoing COVID-19 pandemic can be conducted. Relevant committees are currently reviewing both proposals.

A total of 47 MPs out of the overall 87 attended Tuesday’s parliamentary session and participated in the debate held on the matter.

Hulhumale MP Ali Niyaz expressed support for amending the constitution during the debate. Highlighting that a precedent existed, he noted that term extensions for elected individuals had been utilised following delays in the 2008 parliamentary election and the 2013 presidential election. The MP also noted the importance of allowing incumbent councillors to remain in their positions to prevent disruptions to their efforts to combat COVID-19 outbreaks.

Despite stating that constitutional amendments were the last resort, Thulhaadhoo MP and president of the Judicial Service Commission (JSC) Hisaan Hussain expressed support for the measure since parliamentarians had failed to reach an agreement during the debate.

Deputy leader of the MDP Parliamentary Group Hussain Shaheem also spoke in favour of an amendment.

Attorney General Ibrahim Riffath and Counsellor General to the Parliament Fathmath Filza previously advised against opting for a sunset bill to alter the councillors tenure.

Typically, sunset laws are temporary and cease to have an effect after a specific date, unless further legislative action is taken to extend the law.

– Decide on measures to take if councillors violated regulations

MP Hassan Latheef spoke against amending the constitution, stating that the situation in the Maldives amid the pandemic was not appropriate to take such an action. He stressed that the parliament could establish interim regulations until new councillors can be elected.

Hoarafushi MP Ahmed Saleem also questioned the necessity of amending the constitution to extend terms, highlighting that democratic nations such as the United States did not frequently alter their constitutions. He asserted that the parliament should opt for an alternate solution that did not require an amendment.

Furthermore, Machangolhi North MP Mohamed Rasheed stated that the situation could easily be solved with a sunset bill. He also stressed the importance of preparing for similar situations in the future and including such provisions in the constitution.

Parliament Speaker Mohamed Nasheed stated that differences of opinion existed among legal experts concerning the matter at hand. The parliamentary vote concerning the issue is scheduled for Thursday.

On May 10, President Ibrahim Mohamed Solih ratified a special bill on local elections, instituting provisions to postpone local council and Women’s Development Committee (WDC) elections until the presently-declared state of public health emergency due to COVID-19 is lifted. The terms of all members of local councils across the country will expire on June 2.