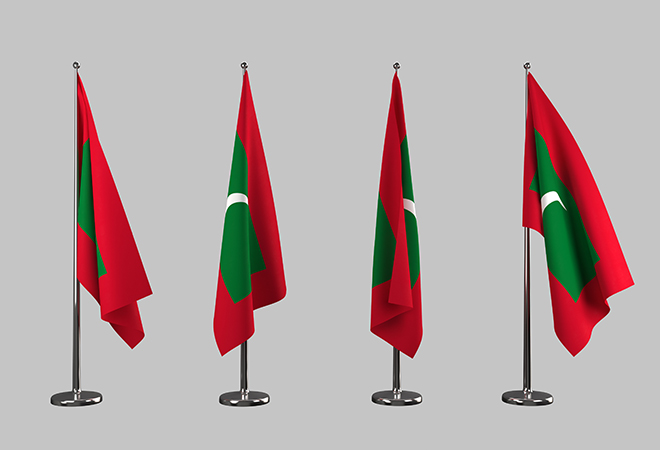 After failing in to arouse public enthusiasm for their ‘India Out’ campaign, opposition PPM-PNC combines, identified with the jailed former president Abdulla Yameen, has tried to raise it in Parliament. However, the opposition could not succeed in Parliament too, as Speaker Mohammed Nasheed threw out an ‘emergency motion,’ citing conceptual and procedural violations. While there is greater cohesion in the government’s response to India-centric development agreements, it is also seeking to keep the China relations on an even keel.

The Majlis motion sought details of India-Maldives funding agreements, which the predecessor Yameen administration did not do viz Chinese projects in its time (2013-18) — and honoured thus by the incumbent government of President Ibrahim Solih. Citing relevant rules, Speaker Nasheed ruled that the agreements that ‘inflict hardship’ on the nation (alone) needed to be presented to Parliament. The documents could otherwise be accessed through parliamentary panels, and a floor-vote was a pre-requisite for taking up the motion.

Alluding to the opposition allegation in his National Day address on Saturday, 17 October, President Ibrahim Solih declared that the nation’s foreign relations with any country will not be allowed to impede its sovereignty and independence. “When the current administration took over, Maldives was very much isolated from the international community. Because of that, a lot of benefits and aid for the Maldives and its people were obstructed,” he said, adding that fortunately, the situation had improved ahead of the Covid-19 pandemic for the nation to be able to get a lot of foreign assistance and support.

In the modern world, the political, economic ideology was such that independent sovereign nations were interconnected and interdependent. “The Maldives is also a part of this community,” President Solih said. He said the nation was blessed with a lot of pride in terms of nationality, the biggest of them being the ‘light of Islam and the shared culture and language.’

In the modern world, the political, economic ideology was such that independent sovereign nations were interconnected and interdependent.

This was a ‘national treasure’ and ‘upholding and maintaining these pillars is a responsibility of all Maldivians,’ Solih said. The “biggest reassurance and happiness is the existence of a defence force ready and prepared to sacrifice themselves with blood for the nation.. This is something every Maldivian is proud of,” he added.

In a media interaction on an earlier occasion, Speaker Nasheed, who is also the president of the ruling Maldivian Democratic Party (MDP), reiterated that participants in the ‘India Out’ protests were ‘extremists.’ He pointed out how as a first step, extremist organisations like the ISIS sought to isolate target-nations from the international community, and this was being attempted in Maldives now. “We will be isolated from the international community if India goes out if another goes out,” he said adding that the ‘India Out’ tag in the social media was spread by foreigners, and no political party in the country was linked.

Addressing the protestors’ demand, Nasheed said the presence of Indian military personnel was a ‘non-issue,’ as they were involved only in humanitarian operations, under the overall command and supervision of the Maldives National Defence Force (MNDF). He pointed out how developed nations like Japan and Germany had militaries of other nations stationed on their territory. The world was intertwined and the government was focused on Indian Ocean security, a joint effort of India, Japan, Australia, the UK and the US. In this background, Speaker Nasheed also visited the MNDF headquarters, to be briefed on the issue, in the presence of Defence Minister Mariya Didi.

On the India debate, a senior minister, appearing in a TV programme, declared that the southern neighbour had the power to capture the Maldives if it wanted but that’s not how international relations worked. “I’m not saying the (Maldivian) military isn’t functional. I’m saying that there are far more powerful countries,” Economic Development Minister Fayyaz Ismail said. Maldivian foreign policy was about cooperation with everyone, and this policy dated back to the age of the sultans and has remained unchanged, he added.

“This administration is paying special attention to neighbouring countries, and we have adopted the ‘India First’ Policy. India is a powerful country in the region, and we share centuries of historical relations,” Minister Fayyaz said, adding, “Check our DNA and it will be relatively similar.” India also had the second-largest Muslim population in the world, he pointed out, in an obvious reference to Maldives’ demography and constitutional mandate as a Sunni-Islamic nation.

The world was intertwined and the government was focused on Indian Ocean security, a joint effort of India, Japan, Australia, the UK and the US.

On the economic front, the South Asian neighbours have since signed the relevant agreements for taking forward India’s $400 million credit for Maldives’ single largest infra project. When completed the 6.7 km Thilamale’ sea-bridge, connecting three islands with capital Male will be more than thrice the length of China-funded Siimale Bridge, connecting Male and airport-island, Hulumale. Under the agreement, signed by Maldives Finance Minister Ibrahim Ameer and two officials of India’s ExIm Bank, general manager Nirmit Ved and chief manager Harish Kumar, the repayment period for the loan will commence five years after the completion of the project.

As if to address transparency criticism, the Maldivian Finance Ministry announced how 65-70 per cent of the project components will be sourced by India, facilitating participation by Maldivian businesses and services. There will also be an international-tendering process for the contract, the ministry said and also made the project’s technical details, public. This contrasts with Yameen era China-funded projects, where the contractors, their men and material, all came from that country.

In another China-related development, Speaker Nasheed told Parliament that Yameen was not serious about implementing the China FTA signed 2014. Unlike mandated, Yameen got the relevant parliamentary laws passed only after three years against the stipulated one-month window, Finance Minister Ibrahim Ameer told a parliamentary panel, earlier. Denying ‘political reasons’ as the cause for the incumbent Government not taking up the China FTA, Minister Fayyaz told his TV audience that does not benefit the Maldives.

The Maldivian Finance Ministry announced how 65-70 per cent of the project components will be sourced by India, facilitating participation by Maldivian businesses and services.

In this backdrop, Foreign Minister Abdulla Shahid’s more recent meeting with Chinese Ambassador Zahang Lizhong has assumed some significance. Minister Shahid cited the ‘strong support’ from China in the nation’s economic process and areas of other mutual interest. In particular, he underscored the ‘overwhelming amount of free aid donations’ from multiple Chinee agencies, corporates and provinces, as Covid-management aid, and thanked President Xi Jinping and Foreign Minister Wang Yi, by name.

On an earlier occasion, the Maldivian Finance Ministry clarified that China had deferred repayment on some of the loans obtained by the Yameen administration, under the G20 Covid-related debt-service suspension initiative. The facility, however, does not cover Chinese credit obtained by private parties and public sector undertakings — over which President Solih too had expressed viability concerns.

Around the time, Amb Lizhong went on record that the ‘debt-trap’ charge against China was ‘baseless and was a political gimmick.’ As may be recalled, Speaker Nasheed has been the one to level this unequivocal charge consistently from the very days of the Yameen presidency.