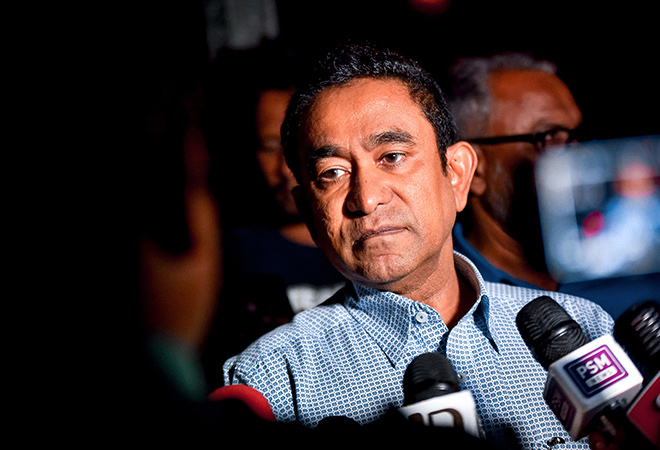 The Opposition — PPM-PNC combine — has called upon New Delhi, along with Sri Lanka and Pakistan, to help obtain freedom for Yameen.

Even as the Government of President Ibrahim Mohamed Solih has been busy unveiling the India-gifted COVID-19 vaccine in the Maldives, the Opposition PPM-PNC combine too has knocked at New Delhi’s doors — to ensure freedom for former President Abdulla Yameen, who is currently serving a jail term for money laundering. His release alone, under the law, can facilitate his contesting the next presidential polls, due in 2023.

The two, near-simultaneous, episodes come ahead of the nation-wide local council elections (LCE) scheduled for 10 April, which have been postponed by a year due to the pandemic. Apart from the immediacy of the election battle, which is the touchstone of the decade-old democracy in the country, the vaccine itself will further unfetter the nation’s mainstay tourism economy in the coming weeks and months.

India has provided the Maldives with 100,000 doses of Covaxin, which has been manufactured in India. President Solih, in an address to the nation, said that the vaccine brought with it new hope for the nation, and thanked India for the free shipment. Foreign Minister Abdulla Shahid, as has become habitual with him of late, thanked India in Hindi for the vaccine, which UN Secretary-General António Guterres, among others, has also applauded.

Apart from Covaxin from India, the Solih Government has also ordered 700,000 doses of Covishield, an alternative, from elsewhere. However, in a tweet, Parliament Speaker and former President Mohammed Nasheed, who is also the ruling MDP chief, said that he ‘very much wished to be administered the Covishield’ against India’s Covaxin.

For India, as a responsible neighbour, supplying the COVID-19 vaccine to nations in the neighbourhood is in furtherance of Prime Minister Narendra Modi’s ‘Neighbourhood First’ policy. It is part of the non-vocalised ‘human security’ aspect in predecessor Manmohan Singh’s commitment that India would remain the ‘net-provider of security’ in/for the region. It also needs to be noted that not a single Indian has protested his Government’s meaningful initiative, despite stressful times nearer home, underscoring the ancient Indian concept of ‘Vasudeva Kudumpagam’ in Sanskrit, meaning ‘The world is one family’ — which recognises the cause of mutual dependence and for the relatively better-off to help the rest. There is an equivalent to the same in every Indian language with the Sangam Tamil literature, for instance, declaring, ‘Yaadhum oore, yavarum kelir.’

For India, as a responsible neighbour, supplying the COVID-19 vaccine to nations in the neighbourhood is in furtherance of Prime Minister Narendra Modi’s ‘Neighbourhood First’ policy.

Significantly, the Opposition PPM-PNC combine has since called upon New Delhi, along with Sri Lanka and Pakistan, to help obtain freedom for Yameen. This was after the High Court confirmed a trial court order, convicting Yameen in a money-laundering case during his presidency, and sentencing him to five years in prison with a US$ 5 million fine.

No marks for guessing which among the three nations the Yameen camp is seriously appealing to — India. Sri Lanka is home to a steady flow of Maldivian expatriates, who also use the Colombo Airport as a major transit point. The ruling MDP has an ‘IOU’ viz Colombo, too. In 2016, then Sri Lankan Foreign Minister Mangala Samaraweera and Finance Minister Ravi Karunanayake worked independently of India’s Foreign Secretary S. Jaishankar — now Indian External Affairs Minister — for the common purpose of obtaining ‘prison leave’ for MDP’s Nasheed, to travel to the UK for spinal treatment, when Yameen was in power.

No marks for guessing which among the three nations the Yameen camp is seriously appealing to — India.

However, Pakistan’s stance on Jameel’s tweet is quizzical, as the incumbent Solih Government has repeatedly challenged Islamabad wanting to raise the post-Article 370 ‘Kashmir situation’ in the Organisation of Islamic Cooperation (OIC). Even more curious is the Yameen camp looking away from China, which used to be their mainstay in regional and international affairs vis a vis India. Much of India-Maldives strains during Yameen’s regime flowed from his excessively siding with Beijing, at the cost of traditional relations with New Delhi. This has also exposed China’s limitations in playing godfather in South Asian politics, after a similar experience in Sri Lanka, when incumbent Mahinda Rajapaksa lost the presidential polls of 2015.

This, however, is not the first time that the PPM-PNC combine has sought India’s intervention, otherwise anathema to Team Yameen, who never tires of charging New Delhi with ‘interfering in the internal affairs of the Maldives. Earlier, when Indian Foreign Secretary Harshvardhan Shringla visited the country towards mid-November, an Opposition delegation, led by Yameen’s predecessor, Dr Mohamed Waheed Hassan Manik, now a senior advisor to the PPM-PNC combine, sought India’s intervention in the matter.

Much of India-Maldives strains during Yameen’s regime flowed from his excessively siding with Beijing, at the cost of traditional relations with New Delhi.