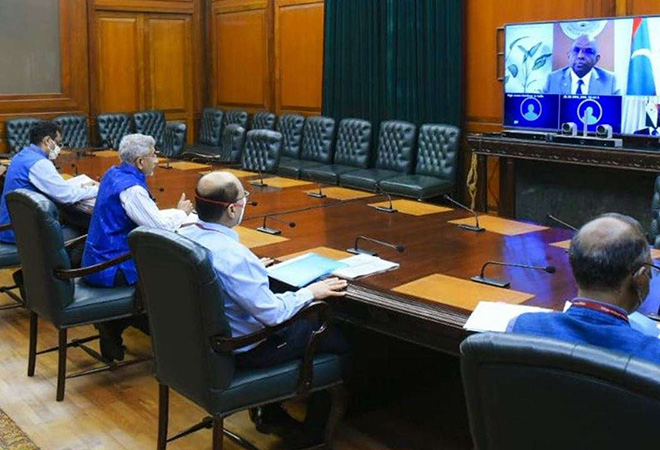 Unlike being made out by a section of the Indian media, following the video-conference between the Indian External Affairs Minister S. Jaishankar and Maldivian Foreign Minister Abdullah Shahid recently, it is not true that China is not entirely out of the archipelago-nation.

In the video-conference, India and Maldives agreed on major projects, one being the $ 500-m ‘super low cost’ funding for a ‘high visibility’ sea-bridge in the Maldives –– in addition to the $ 900-m projects now underway. On island-specific smaller projects, where New Delhi had taken the early initiative, Beijing still is present, but a clear Maldivian reiteration now that India and Indian Ocean security will always be high on the nation’s mind seems to have provided an edge to India.

Also, the wide media coverage of the video-pact between Jaishankar and Shahid goes on to underline the positive popular perceptions in India, unlike any time in the past. The video-pact formalises the bilateral agreement for the ‘Greater Male Connectivity Project’, the nation’s single largest infrastructure scheme, linking capital Male with Vilimale, Thilafushi and Gulhifalhu islands through sea-bridges and causeways. It was part of the $ 1.4-b package aid that Prime Minister Narendra Modi promised during the maiden State visit of Maldives President Ibrahim Solih in December 2018.

When completed, the 6.7-km bridge will be more than thrice the length of the China-funded Sinimale sea-bridge, connecting Male with airport-island, Hulhule’, which was conceived and constructed during the reign (2013-18) of jailed former President Abdulla Yameen. The new Indian project goes a step further as it will help de-congest Male, the capital with the highest population density.

A third of Maldives’ 400,000 population resides in Male, contributing to unaffordable rentals, extremely cramped family spaces, which in turn challenges personal hygiene and leads to social disharmony in the Islamic community with high incidence of divorce and re-marriage. In time, there could be further decentralisation of education and healthcare facilities, which is high on the average Maldivian’s personal and national priorities.

Of the $ 500-m package, India is giving $ 100 m in grants and the rest as credit at an affordable rate. In contrast, as elsewhere where China has funded infra projects, in Maldives, too, the term ‘debt-trap’ is in common employ. Unlike China, the India-funded projects inherently aim at creating local jobs and accepting local partnerships, thus boosting host economies, at the personal and national level.

In the case of Maldives, local efforts still need to be made to motivate the youth, who prefer government jobs to acquire skills, for which, again India, for instance, can help set up multi-layered technical school(s) like the ITIs back home, as different from the IITs. Local jobs apart, the transport cost of construction material, which Maldives anyway has to import, will be cheaper from India, considering the distance.

India has also extended a $ 250-m budgetary support for Maldives, an area where New Delhi seems to be the favourite aid-provider. Given the inherent weaknesses of a small population spread across small and tiny islands spread across a 900-km span in the Indian Ocean, the Maldivian economy will take time to become self-reliant.

The four-decade-old tourism industry is the nation’s economic mainstay, but Tsunami-2004 and Pandemic-2020 have pulled it back, making low-cost external borrowing inevitable. In this regard, the two sides have signed an agreement, called an ‘air bubble agreement’,  for a quarantine-free arrival from each other country. This will help boost Maldivian tourism, which opened up on 15 July, besides it helping Maldivians who need to avail emergency medical care and higher education in India.

For a further boost to tourism, the two Foreign Ministers revived the pre-Covid idea of a 700-km Male-Kochi ferry service through Kulhudhuffushi. Minister Jaishankar said the ferry service would boost economic partnership between the two countries while a statement from the Ministry of External Affairs added that it will (also) “enhance sea-connectivity and provide predictability in supplies for importers in Maldives and exporters in India. It will also reduce logistics costs and times for traders”. This apart, India is extending financial support for work on the existing airport in Kulhudhufushi and for a port in Gulhifahu. In the case of ferry service, however, India could take a closer look at the revival of the forgotten one with post-war Sri Lanka less than a decade back, for reasons and rectification in the case of Maldives.

Independent of the video-con, but as a part of the larger Indian aid package, Indian High Commissioner Sunjay Sudhir and Maldives Foreign Secretary Abdul Ghafoor, among others, recently signed an agreement for developing five eco-tourism zones in the southern Addu Atoll, as part the India-aided  ‘High Impact Community Development Projects (HICDP), on a total grant of $ 5.5 m. At present, another nine HICDP projects are being implemented in Maldives.

As High Commissioner Sudhir pointed out, developing high-impact assets, building capacities within the local councils and supporting the local island economy are the most important objectives of these projects. Three such HICDP projects in Addu, relating to setting up of fish-processing plants, were awarded last month, HC Sudhir said adding that taken together, these projects would bring about a transformation in the economic and employment landscape of Addu.

President Solih hailed the Indian assistance as “a landmark moment in Maldives-India cooperation”. In response, Prime Minister Modi reiterated that “our special friendship is, and will always remain, as deep as the waters of the Indian Ocean”.  He said that India will continue to support the Maldives in mitigating the economic impact of the Covid19 pandemic.

In his turn, Maldivian Parliament Speaker and former President Mohammed Nasheed reiterated his known position that financial packages from India is exactly what Maldives needs and different from loans that will leave the nation mired in debt. That is mainly because, even more this time, New Delhi lets the host-nation decide on individual projects, big and small, without imposing its ideas. Nasheed described the Indian aid as “super low-cost development assistance”. It is “genuine help from a friend,” and ere different from “eye-wateringly expensive commercial loans that leaves the nation mired in debt”, he added without naming China on this occasion.

Nasheed was obviously referring to China, which he has not shied away from naming on other occasions. Independently, Finance Minister Ibrahim Ameer declared that the nation would not fall into a ‘sovereign default’. The question became relevant after China served notice on Maldives recently to pay up $ 10 m as part of a $ 127-m loan granted for a resort project of Ahmed ‘Sun’ Siyam, under a ‘sovereign guarantee’ from Yameen’s Maldives. The government has since announced that Siyam’s Sun Group had paid up the China dues.

In the era before China’s ‘String of Pearls’ and Belt & Road Initiative (BRI), India had near-exclusive ties with the Maldives on all fronts, under Presidents Maumoon Abdul Gayoom (1978-2008) and his ‘democratic successor’ in Nasheed. It is in this context that the periodic re-assertions by Nasheed and the more recent one by Economic Development Minister Fayyaz Ismail on the security front assume significance.

In a comprehensive approach at a Rajje TV programme, Minister Ismail said that his government did not have any problems with China, but it will not allow the country to be used to endanger the security of a neighbouring nation or disrupt the peace of the Indian Ocean.

“We will obtain loans from China, and Chinese investment is also welcome. We are also maintaining a close relationship with China,” online Sun-News journal quoted Minister Ismail as saying. But the problem with China arose after that nation took ownership of certain locations following of non-repayment of loans.

Minister Ismail, in particular, responded to the Yameen-centric Opposition charge that India wanted to occupy the Maldives, by creating differences between the people and the Government. “If India wished to capture the Maldives, it would have been done centuries ago. We have to accept the reality, that nothing that threatens the security of India can be done in the Maldives,” he added.

The Maldives should prioritise regional security, Minister Ismail said, adding the nation was not oblivious to rivalries between world powers, and would still prioritise the safety of Sri Lanka and India as a neighbouring State. “We three are neighbours and cannot be re-located elsewhere,” he pointed out.