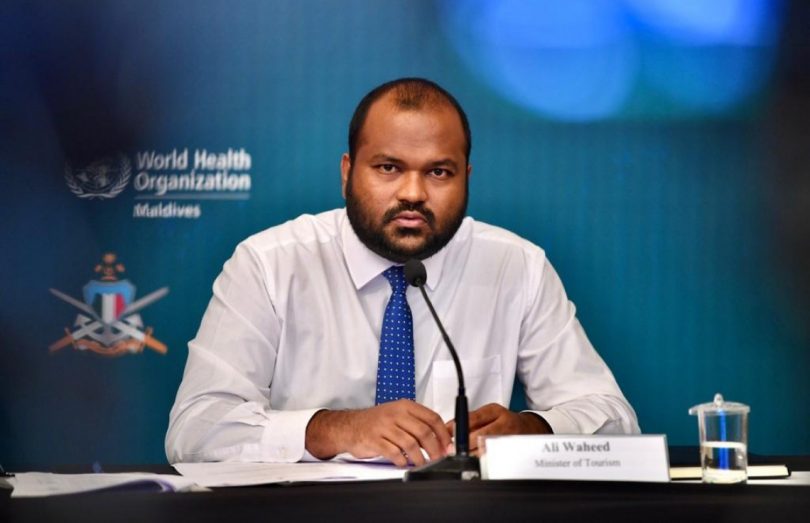 Recently dismissed Minister of Tourism Ali Waheed, on Sunday night, declared that the allegations of sexual harassment raised against him were a scandal planned by a group of people, and claimed that a fair investigation will prove his innocence.

After being summoned to Maldives Police Service for the first time since the scandal surfaced, Waheed described the accusations against him to the media as a “politically motivated” matter.

He added that the public will learn the truth with the conclusion of the investigation.

The former tourism minister confirmed that he denied all the accusations levelled against him by the police.

However, he did not detail the aforementioned accusations, noting that the police would reveal that information.

President Ibrahim Mohamed Solih had ordered Waheed’s resignation on July 8, following complaints regarding incidents of misconduct within the tourism ministry, which were lodged by the ministry staff at the President’s Office and the Ministry of Gender, Family and Social Services.

Waheed was sacked on July 9, marking the first time a cabinet minister was fired over allegations of sexual abuse after he failed to tender his resignation as per the order.

The leader of government-aligned Jumhooree Party (JP) Qasim Ibrahim had also ordered Ali Waheed to resign from the position of party president – an order Waheed chose not to obey.

He clarified to the media that he did not resign from any of the positions because he did not accept the accusations against him, adding that he has always worked with integrity.

Waheed maintained hope that justice would be served.

Noting that he had exercised his right to remain silent on many occasions he was previously summoned to the police, Waheed stated that he had answered all of the questions posed by the authorities on Sunday night.

“I will face this case”, he declared, stressing that he will not remain silent and will fully cooperate with investigative authorities.

Although he was removed from the cabinet, Waheed said that he respected President Solih’s decision to dismiss him. He reiterated his hopes that an independent investigation will reveal the truth to both the public and the president.

Highlighting the roles he had played in bringing the incumbent administration into power and through the ongoing COVID-19 response, he expressed sorrow over the recent turn of events. However, he asserted that he had filled various positions in the parliament, the cabinet and political parties with integrity.

According to Ali Waheed, his only goal at the moment was to clear his name.

During a press conference held on July 16, Chief Inspector Mariyam Azma revealed that the sexual harassment case against Ali Waheed was formally lodged at the authorities on July 9, after which the police collected statements from a total of 15 individuals.

Police have confiscated Waheed’s mobile phone and laptop in regards to the investigation, as well as placed him under a travel ban.

Waheed is among a number of politicians facing accusations, amid a string of high- and low-profile sexual abuse, sexual assault and harassment cases that recently surfaced.

Several protests have been held by various rights groups and activists, demanding that perpetrators and authorities be held accountable and justice ensured for victims and survivors.

Meanwhile, public ire continues to soar over the government’s meagre record of arresting and convicting perpetrators of sexual offences despite several promises to support the rights of children and women.