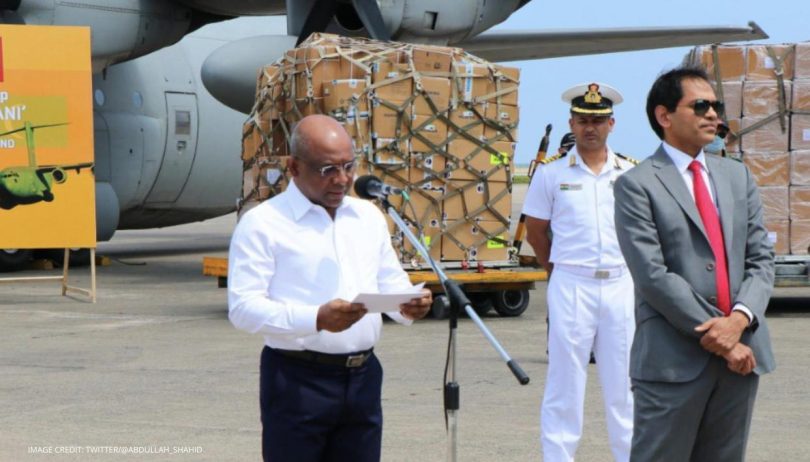 Maldives has reportedly thanked India for the export of hydroxychloroquine (HCQ), the anti-malaria drug that several countries have chosen to adopt as a form of treatment for the Coronavirus. Foreign Minister of Maldives, Abdullah Shahid, wrote in a tweet that Maldives is grateful to PM Modi for acknowledging its request for the Hydroxychloroquine supply, “the game-changer” drug to combat the COVID-19 disease. He further praised India saying that “a friend in need is a friend indeed”.

Earlier, Maldives President, Ibrahim Mohamed Solih, said in a video press conference for the SAARC leaders that he would begin by thanking the Indian PM Narendra Modi for a timely call for a regional initiative to combat the increasing threat of the Novel Coronavirus. No country on its own can succeed in combating the virus, he added. Solih was further quoted as saying amid his address that he completely agreed with PM Modi for a regional comprehensive strategy to combat the spread of the COVID-19 disease, appreciating the Indian Prime Minister’s containment efforts.

Earlier, the Union government had lifted restrictions on the export of 26 pharmaceutical ingredients, anti-malaria drug, hydroxychloroquine (HCQ) being one of them. India then dispatched its first consignment of export to at least 13 countries including the United States of America, Brazil, Dominican Republic, Nepal, Bhutan, Spain, Bahrain, Seychelles, Afghanistan, Germany, Bangladesh, and Mauritius.

PM Modi was reported saying to the SAARC leaders that the people-to-people ties among the SAARC countries were ancient and the societies were deeply interconnected. Therefore, the countries must all prepare together, act together and succeed together to overcome the deadly coronavirus, he added.

Trump said “we will remember it”

Earlier, Israeli Prime Minister Benjamin Netanyahu, US President Donald Trump, and Brazilian President Jair Bolsonaro thanked Prime Minister Narendra Modi for his decision to approve the supply of chloroquine. Netanyahu, in a tweet, said “Thank you, my dear friend, @narendramodi, Prime Minister of India, for sending Chloroquine to Israel. All the citizens of Israel thank you!”.

The US Food and Drug Administration (FDA) has issued an ’emergency use authorization’ for the drugs chloroquine and hydroxychloroquine. As per reports, the Trump administration had said that it was planning to distribute a million-dose quantity of the anti-malarial drug to hospitals across the US. Donald Trump wrote in a tweet in context to India’s decision to export the drug to the US saying, “I want to thank Prime Minister Modi of India for allowing us to have what we requested for the problem, and he was terrific. We will remember it.”