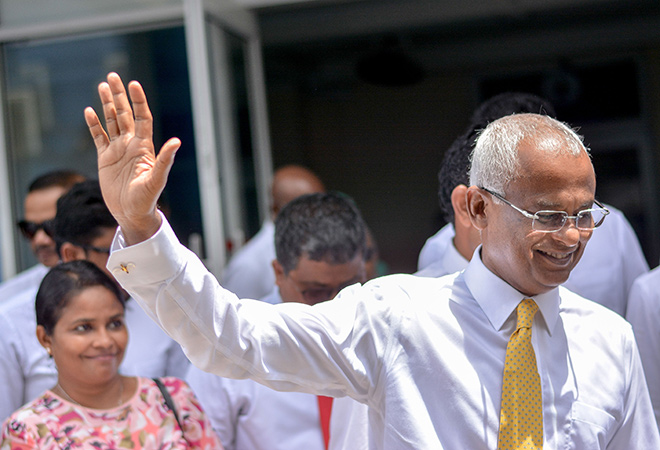 In a significant presidential initiative on the domestic political front, incumbent Ibrahim Mohamed Solih met allies of his Maldivian Democratic Party (MDP), with party president and Parliament Speaker Mohammed Nasheed too participating in it. The meeting assumes significance in the light of the nation-wide local council polls, likely to be held on 3 April, as per the tentative schedule indicated by the Election Commission (EC).

The polls were due by March last year, but they were postponed owing to the Covid pandemic. Even without it, the MDP was considering extending the term from three years to five, against anticipation about victory, but the pandemic eased the party’s apprehensions.

The local council polls are significant for more reasons than one.

First, coming now as it does mid-way through Solih’s five-year term, which commenced in 2018, the local council polls is a ‘mid-term’ referendum of sorts. It can also provide an occasion for mid-term course-correction for the government, as also the divided opposition.

Two, this is the last major round of elections, ahead of the presidential elections, due by November 2023. Winners now will hence trumpet the results as a reflection of the public mood, and begin working on alliance-formation for the presidential polls.

Three, for the MDP’s allies, it is a test for their alliance leader. The last time they let the MDP delay the seat-sharing talks, they were caught unawares when party chief Nasheed unilaterally announced the decision to go it alone. Nasheed claimed that there was no talk of their four-party alliance from the successful presidential polls continuing for the parliamentary elections.

Four, and of importance to the incumbent, it is a test for Solih’s ability to bring around friend, relative and political mentor Nasheed around lest the latter should spoil the alliance broth for the local council polls. It will also be indicative of Solih’s desire to seek MDP presidential nomination in 2023, with party’s current allies backing him all the way up to the hustings.

Five, and of equal importance, the local elections, followed by regular meetings of the grassroots-level institution, party cadres across the board, will be re-energised and re-engaged more purposefully with the voter. This has become even more necessary after the Covid pandemic, which has put things out of gear, yet in greater perspective.

Despite Solih’s best efforts to continue the alliance for the parliamentary polls, only the religion-centric Adhaalath Party (AP) ended up having a partial seat-sharing arrangement with the MDP. The other two, namely, the Jumhooree Party (JP) and the Maumoon Reforms Movement (MRM) of former President Maumoon Abdul Gayoom, were shown the door.

For the allies, an early decision by the MDP on the alliance for the local council elections (LCE) and a fair seat-sharing arrangement is crucial. They also do not want to burn bridges on both sides. If they had to break ranks with the MDP, they would need time to reorganise themselves, or to negotiate a similar arrangement with the opposition PPM-PNC coalition of jailed former president Abdulla Yameen.

For the allies, an early decision by the MDP on the alliance for the local council elections and a fair seat-sharing arrangement is crucial.

The election is crucial for the PPM-PNC to combine even more. As an incumbent who lost the 2018 presidential polls expectedly, Yameen still surprised knowledgeable Maldives-watchers with a high 42 per cent votes. It fell within the 40-45 per cent range of half-brother and incumbent Gayoom in the first multi-party democracy polls of 2008. MDP’s Nasheed, now Speaker, became President through a second, run-off round victory.

In 2008, Gayoom polled the single largest 40 per cent votes in the first round, followed by Nasheed, 25 per cent. In the second run-off round, Nasheed with allies, including the JP, by his side went all the way up to 55 per cent while Gayoom polled an improved 45 per cent. In both rounds, Gayoom got all of the five per cent vote-share of Yameen’s then-existing People’s Alliance (PA), as subsequently proved in the parliamentary elections six months later.

The question if the 2018 Yameen vote was a reversal of the 2008 Gayoom show. For, in the subsequent 2019 parliamentary polls, contesting alone under a brand-new party, Gayoom’s third creation in about a decade, the MRM fared badly, that too without a common symbol for all its candidates. The party won only one seat.

In the 2019 parliamentary polls, contesting alone under a brand-new party — Gayoom’s third creation in about a decade — the MRM fared badly.

Contesting the 2019 parliamentary elections independent of the allies, the MDP swept the seat-share with 65 of the total 87 seats. Earlier, the Nasheed leadership had ditched allies for the parliamentary polls of 2009 after ‘using’ them for his victory in the run-off round presidential polls only months earlier.

For the Solih leadership, however, the shrinking of his of 58 per cent vote to 46 per cent in the 2019 parliamentary elections, for no fault of the President, was/is a matter of concern. The divided opposition, including the estranged allies of the MDP, had polled 54 per cent at the time, what with a 50 per cent cut-off for the presidential polls.

For the allies to take the MDP seriously for the next presidential polls, they need evidence on the ground that the leader would play by the unwritten rules of the coalition game. Else, they will need time to form a third front or negotiate with the Yameen camp. Either way, the chances are that they may all go back to the pre-2018 model of contesting the first round on their own in the first round and negotiating an alliance only for the run-off.

For the Solih leadership, the shrinking of his of 58 per cent vote to 46 per cent in the 2019 parliamentary elections — for no fault of the President — is a matter of concern.

In short, any sense of continuing dependence on allies for a presidential poll victory could mean that the MDP’s registered members, called upon to elect a presidential candidate, under the law, could prefer incumbent Solih or such other moderate. If the cadres become confident of the party winning the presidential polls on its own, then Nasheed may become their favourite all over again. The chances are that Nasheed may call the party’s general council to decide on the alliance issue ahead of the local council polls, possibly through the online mode.

In this background, the Solih-hosted alliance meeting recently was attended by MRM founder Gayoom, JP boss Gasim Ibrahim, and AP leader and Home Minister Sheikh Imran, apart from MDP’s Nasheed. Incidentally, this is possibly the first time that all the coalition leaders are meeting for the first time after their decision to do so at least once every month, taken after Solih being sworn in President.

In a recent interview to The Hindu, the India-based daily, Solih expressed confidence in the ruling coalition despite disagreements within. “There are inevitable disagreements and disgruntlement, but we remain united on what matters … We have been able to maintain the coalition and have overcome immense challenges by working together. I am confident that we will be able to resolve all such issues with the dialogue and goodwill that brought us all together in the first place,” he said, amidst increasing pressure from within his MDP, to break the alliance.

For its part, the Election Commission has fixed the rescheduled the local council elections for 3 April, pending Parliament amending the relevant laws to be able to conduct the elections during the pendency of nation-wide health emergency, and also to fix a new date for the polls.

In a public appeal, delivered through acting opposition coalition leader, Abdul Raheem Abdulla, who had called on him at the Maafushi Prison, Yameen, in turn, called upon the people to defeat the Solih government in the local council elections. Raheem thanked President Solih for allowing visitors for Yameen but said there was no question of the latter making a ‘deal’ with the government if freed from prison.

Raheem, instead, suspected the High Court’s last-minute adjournment of the verdict on Yameen’s appeal against the trial court awarding him five-year prison term and $10 million in fine in the ‘money-laundering case,’ from 14 January to 21 January, and claimed that the Solih-Nasheed duo was afraid of an early release for Yameen and were trying to influence the judiciary. As may be recalled, the trial court itself was reconstituted with a three-judge bench on the very day a single-judge bench was to pronounce verdict.

For its part, the Election Commission has fixed the rescheduled the local council elections for 3 April, pending Parliament amending the relevant laws to be able to conduct the elections during the pendency of nation-wide health emergency, and also to fix a new date for the polls. The EC also plans to hold simultaneous polls to the nation-wide Women Development Committees. Expecting the scheduled special session of Parliament to pass the draft Bill in time, the EC has started working backwards, to meet various deadlines.

In this direction, the EC has since advised the AP, a government party, to revise its rules to remove the bar on women to become party leader. The party has since announced its decision to hold an online congress, for the purpose. The party has already scheduled elections for the party presidency and vice president on 23 January.