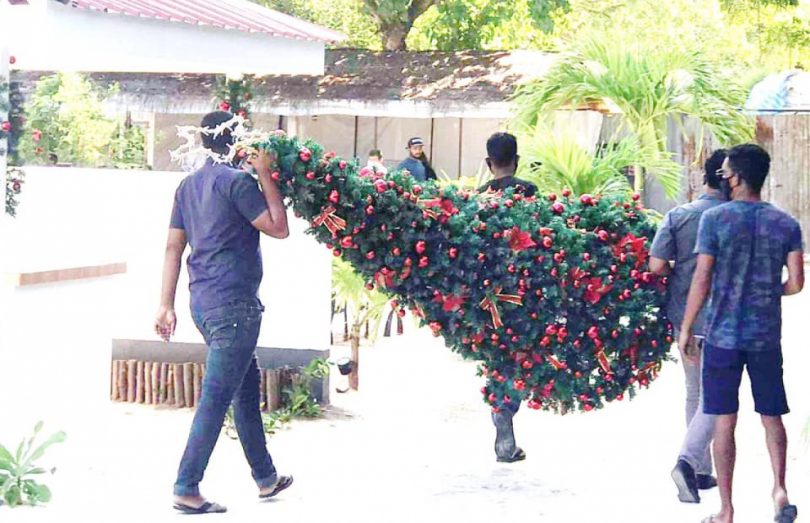 Maldives Police, confirmed on Friday, that authorities at Maafushi, Kaafu Atoll had taken into custody a Christmas tree.

According to the Police, once the presence of a tree standing in violation to Maldives’ Religious Unity Act (Act No. 6/1994) was reported, officers attempted to sway the people responsible to take it down.

However, as the discussion prove unsuccessful, Police removed the tree and brought it to the Maafushi Police Station, where it is apparently now located.

With origins in 16th century Germany, decorated evergreen conifer trees, real or artificial have become one of the most well-known symbols of Christmas across the globe.

Although Muslims recognize Jesus as a prophet decreed worthy of utmost respect, the celebration of his birth has been known to offend the sensitivities of some religious factions.

Translation: “It is a Maldivian dressed as Santa Claus? 1 business, 1 country. Muslims in all the islands. Business opportunities should be equal for all. Resorts are also in Maldives. Many Maldivians are employed there. Then Christmas and New Year decorations should be stopped there too”.

In the island nation of Maldives, where Maldivians are declared Muslim at birth, authorities seemingly turn a blind eye to celebrations of Christmas that take place in resorts across the archipelago.

@MadhilSaleem celebrating the Christmas and other festive days of the Kuffar in any mean are HARAAM to us muslimeen. Maldives is a Muslim community, and so we need to stop doing such evil.
And it’d be more better if you ask yourself where you’re heading to.

I’m sorry but if we can’t put a tree decorated like this and if they say it effects our religion or culture so by all means why aren’t the police going to resorts and cancelling these celebrations, really stupid, it’s not like they are getting drunk !

The holiday period generates some of the highest revenue raked in by the tourism sector annually.

However, despite locals also being present in those resort islands, authorities use a stronger hand to enforce these laws in local islands, where the festivities housed by guesthouses and other tourist outlets, are similarly meant solely for the enjoyment of foreign visitors.